What threats do they face ?

How to protect them ?

Manta rays are open sea animals ( referred to as “pelagic”), between 0 and 1000 meters deep. There are two species: the giant manta ray (Mobula birostris) which can have a wingspan of up to 7 meters, and the smaller reef manta (Mobula alfredi), with a wingspan of 3 to 4 meters. Together with the other 9 known species of rays, they form the group of Mobulidae (1).

Accustomed to temperatures above 20°C, these species are mainly found in tropical areas, but their annual migrations also take them to the warm temperate areas of the Atlantic Ocean (2). It is a slow growing fish, with a late sexual maturity and low fecundity: only 3 juveniles per female can be born during their life (3).

They swim deep at night and rise to the top of the water column during the day, to feed by filtering plankton. They can be found more frequently during the day at ‘cleaning stations’, where they allow themselves to be deparasitized by other species such as wrasses (Labridae)(4).

What threats are they facing?

In 50 years, sightings of stingrays have decreased by an average of 70%, and even by 90% off the coast of Mozambique (5), but what causes their disappearance?

Manta rays have been targeted by small-scale fisheries for centuries; but since the 1990s, rays have been fished more and more for their fins, skin and especially their gills, which are highly sought after by Chinese medicine for their aphrodisiac properties. The democratization of these traditional remedies to hundreds of millions of potential consumers could lead to the total extinction of manta rays (6). Non-selective professional fishing techniques (net, longline, purse seine, bottom trawl…) are also a scourge for manta ray populations and other large marine animals (sharks, turtles and cetaceans). Many by-catches occur during tuna fishing, a species which is highly desired for its meat and whose habitat is intermingled with that of the manta rays.

Several types of pollution threaten manta rays. The first one, not much talked about in the media and still too little known, is noise pollution. Caused mainly by maritime transport, oil and gas exploration, noise pollution prevents individuals from detecting their prey, recognizing their predators, their partners and their environment in general. It affects many marine species, especially migratory and coastal species. It is very difficult to evaluate the impact of this form of pollution on Manta rays; but it is suspected that it is the cause of their disappearance in some highly anthropized areas (7).

Plastic pollution is also a major problem for manta rays. To collect the plankton they feed on, manta rays filter a large quantity of water (more than 86 m³ per hour!) through their gills. It has been reported (Germanov et al., 2019) that rays in Manta Bay (Indonesia) can directly ingest between 110g and 980g of plastic per kilo of plankton (8). In addition, they also undergo bioaccumulation of microplastics, i.e. they accumulate in their body the plastics previously ingested in the plankton they consume. 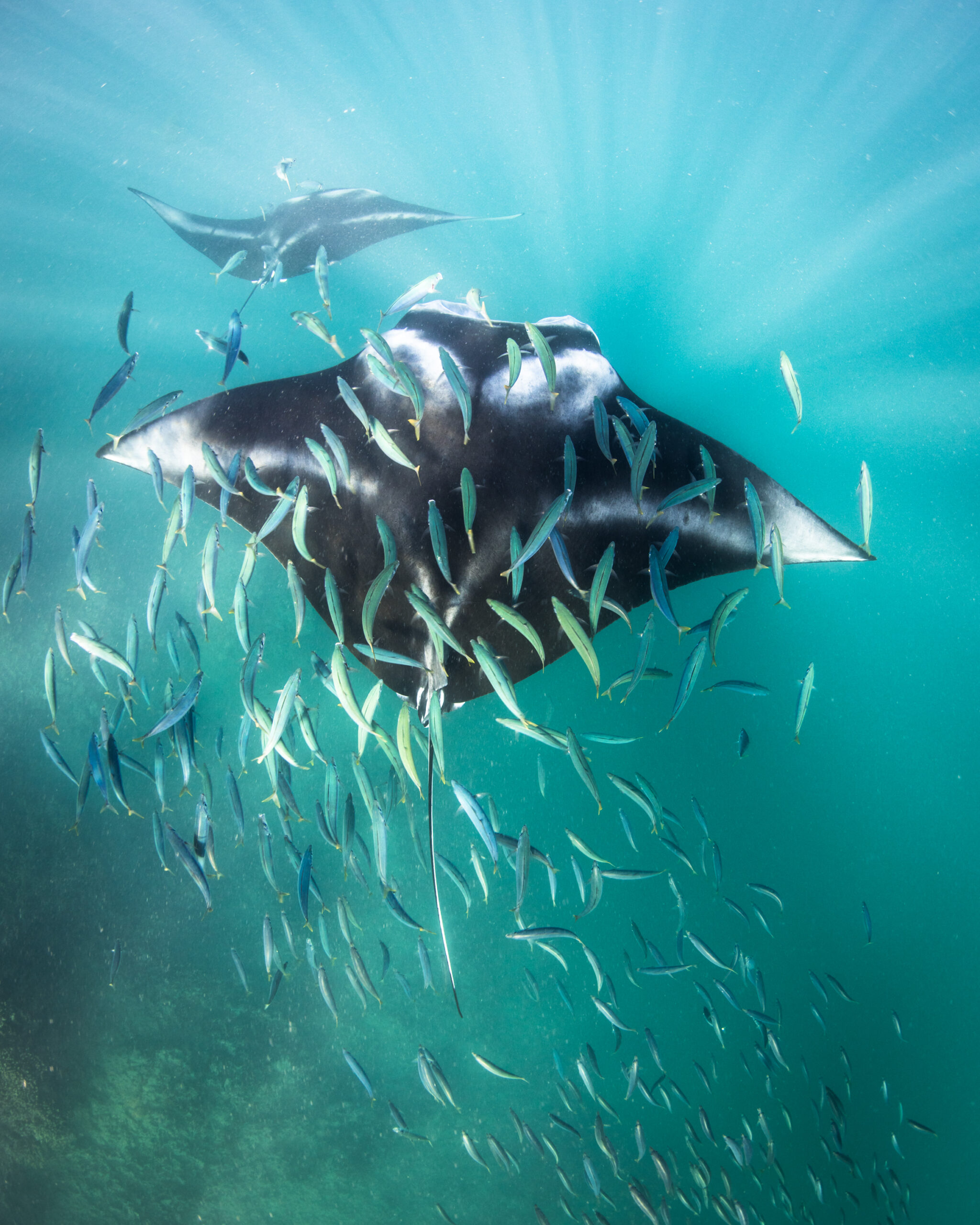 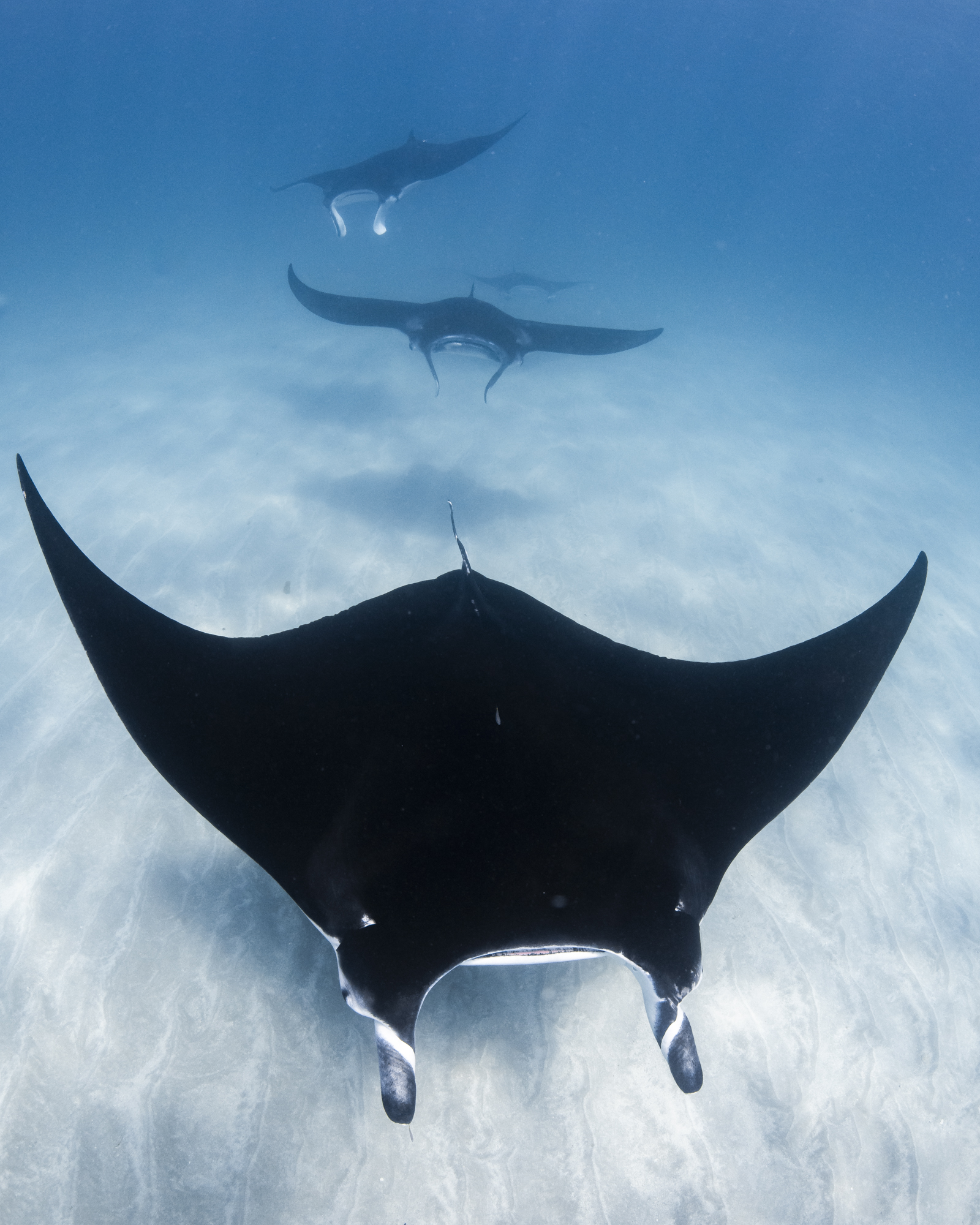 How to protect them?

The creation of marine protected areas (MPAs) seems necessary in the protection of elasmobranchs as a whole, victims of illegal fishing and by-catches. To envision efficient protection, it is imperative to know their geographical distribution during the year and even during the day. As plankton is their main source of food, it is possible to predict their location and movements by following the blooms of microalgae and zooplankton. These can be formed at the edge of the drop-offs when the light intensity is high; if the light intensity is low during the day, the manta rays preferentially move towards the cleaning stations at the reefs (9).

Recent studies have shown that by-catches of rays (but also of other elasmobranchs such as sharks) could be drastically reduced by banning trawling at depths greater than 600 m. In these areas (between -600 and -1000m) the proportion of incidental catches of skates and sharks would increase strongly, in contrast to the commercial benefits related to other species of interest (10).

Illegal fishing is motivated by the high resale price of ray meat, mainly in Asian markets. The fight against illegal fishing must include increased surveillance of MPAs and the tracking of illegal vessels. It is theoretically possible to track them by satellite, via the AIS (automatic identification system), but this is not infallible since fishing vessels are allowed to turn off the positioning system (in order to escape potential pirates). It is then impossible to verify if these deactivations are the result of a danger, or of an effective motivation to fish in illegal areas (11).

In the face of plastic pollution at sea, the solutions lie above all in the management of waste on land. As much as 80% of the waste in the ocean comes from the continents, carried by the great rivers (12). As for noise pollution, even if the United Nations recognizes its impact on many marine species, there is currently no law regulating it at the European level. Two deputies (Mr. Loïc Dombreval and Mr. Jean-Luc Lagleize) have already asked for measures to be taken in the National Assembly in 2019, but no law has been passed for the time being (13). 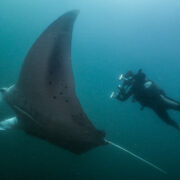 ⇒ Manta Project: South Africa and Mozambique are hotspots for many species of rays and sharks that are endangered, or for which critical data are missing. Manta ray sightings there have declined by 90%, highlighting the urgent need to protect these species and their key habitats. The main objective of this project is to identify areas of overlap between manta rays and industrial fishing, and to assess the effectiveness of marine protected areas (MPAs) for their conservation through satellite tracking methods. 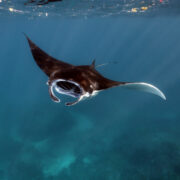 ⇒ The largest population of oceanic manta rays in the world has been discovered near the coast of Ecuador: 22,000 specimens are believed to be present in this area according to a new study by the Marine Megafauna Fundacion: “Demographics and dynamics of the world’s largest known population of oceanic manta rays Mobula birostris in coastal Ecuador”.

(1) Phylogeny of the manta and devilrays (Chondrichthyes: mobulidae), with an updated taxonomic arrangement for the family

(6) Vulnerabilities and fisheries impacts: the uncertain future of manta and devil rays