What role do they play in climate regulation?

What sustainable solutions can they bring us?

The first algae appeared on earth more than 3 billion years ago. Initially unicellular, they gradually evolved to form the first complex multicellular organisms, capable of photosynthesis. That is to say, capable of developing using only the energy of light and some mineral elements (including CO₂). There are two categories: macroalgae (multicellular) and microalgae (unicellular and often microscopic), and several classes, according to the pigments that color them: blue algae (cyanobacteria), green algae (Chlorophytes), red algae (Rhodophytes) and brown algae (Phaeophyceae). Green algae gave birth, 500 million years ago, to all land plants (Embryophytes): together, they form the “green lineage”, which includes plants with a major pigment: chlorophyll.

Algae present an important diversity of forms, metabolisms, and are at the base of very different ecosystems: the kelp form marine forests (like the kelp forests) in cold and luminous waters, while calcareous algae can build immense underwater calcareous massifs in the depths (the coralligenous habitat of the Mediterranean).

The importance of algae in climate regulation.

Algae play a major role in the composition of the atmosphere, and thus in the regulation of the climate. 50% of the oxygen present in the atmosphere today was produced over hundreds of millions of years by microalgae, consuming CO₂ and releasing O₂ through photosynthesis. When they die, they settle on the seabed, trapping the CO₂ in the sediment over the long term: this is the biological carbon pump.

Algae are directly involved in many major events in the geological history of our planet. 2.45 billion years ago, blue-green algae (cyanobacteria) were at the origin of the Great Oxygenation (1), releasing massive amounts of O₂ into the atmosphere, creating at the same time the ozone layer (O₃).

It is also thought that it is thanks to the consumption of algae, fish and other sea products rich in polyunsaturated fatty acids (omega-3 for example), that our species Homo Sapiens was able to develop a powerful brain (2). 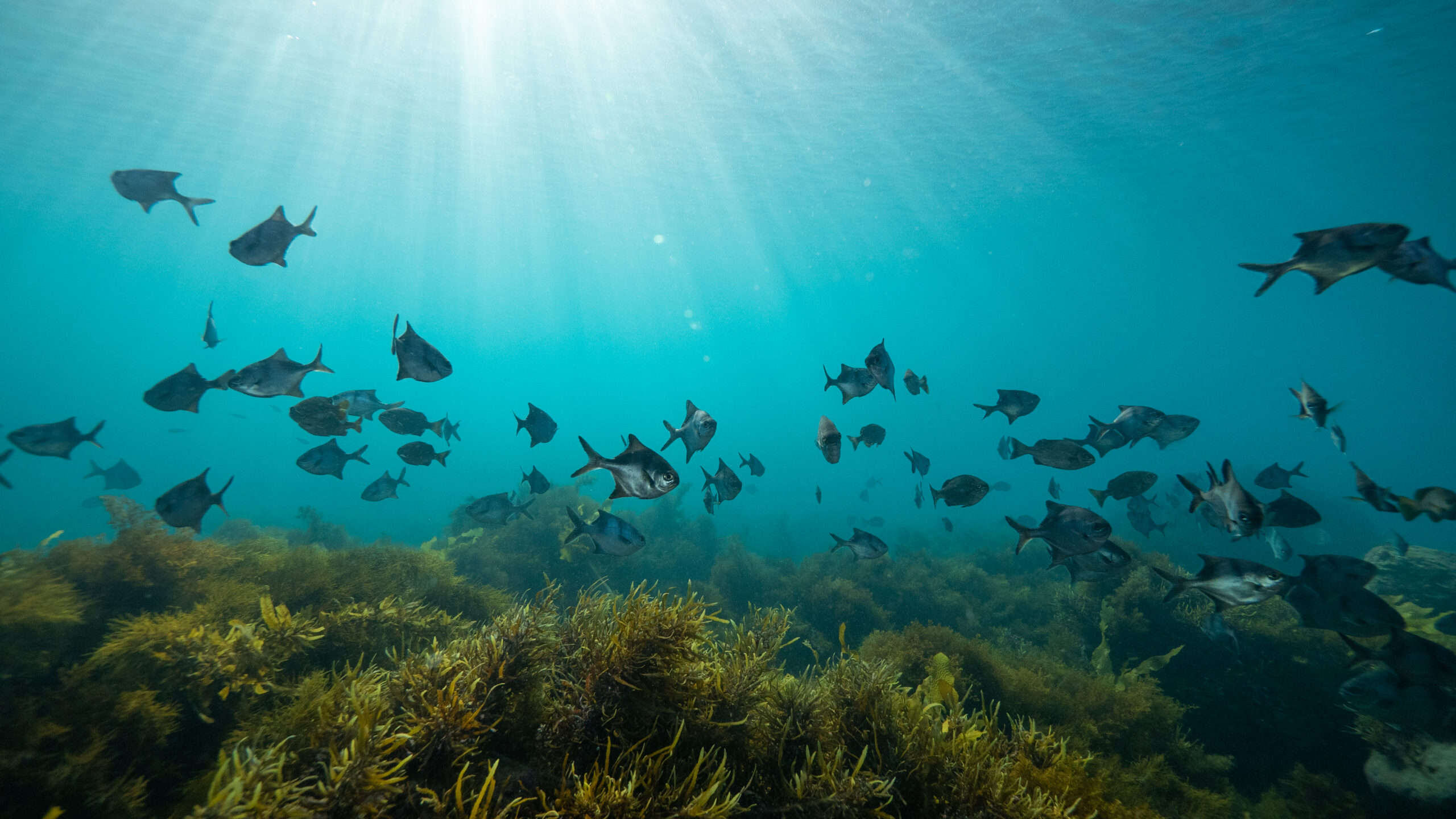 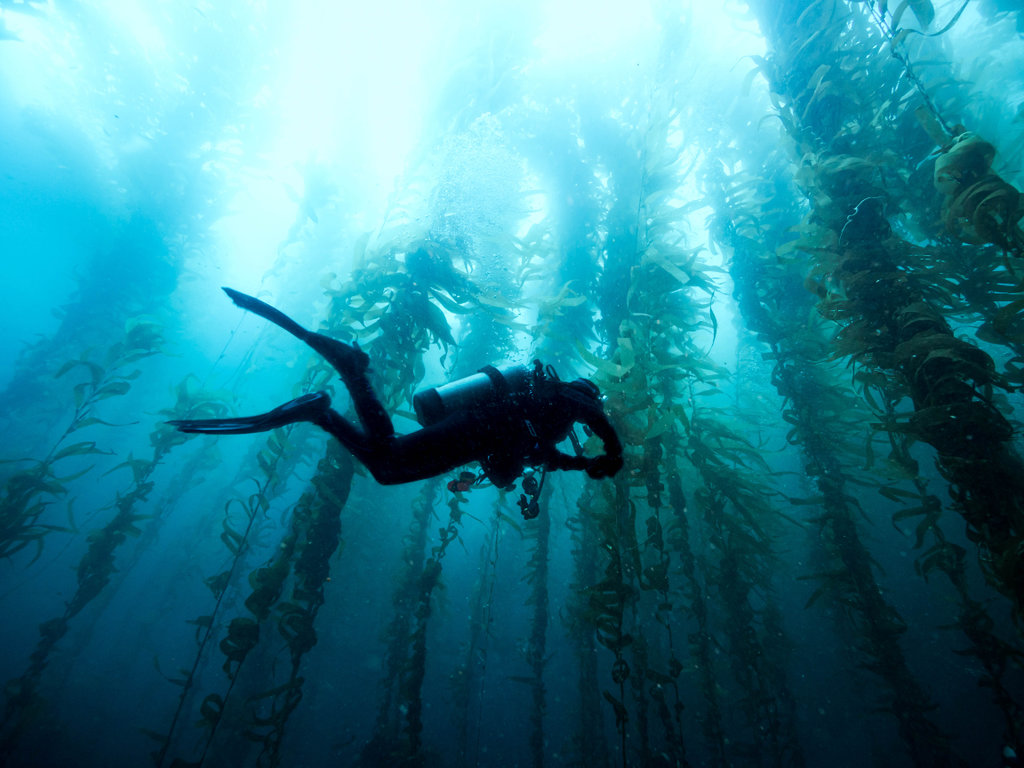 Algae, a solution to feed the planet?

Although the oceans cover 73% of the earth’s surface, seafood products currently constitute less than 3% of the calories in our diet (3). However, macroalgae are all edible and an immense food resource that is still little exploited, although they could represent a solution to the over-exploitation of agricultural land and to food insecurity in certain regions of the world. Beware, at very high doses, some of them can be toxic (4).

Some countries, for cultural or nutritional reasons, consume much more seaweed, with real benefits for human health. Some of them are very rich in vitamin B12, a vitamin that is rare in ‘terrestrial’ vegetarian diets, and their medical virtues are highly sought after (5). A forest of Macrocystis algae (brown algae 40 m high) has a growth rate of up to 40 cm per day (6), a productivity unmatched by terrestrial crops.

Furthermore, algal forests are important habitats for marine biodiversity. Some fish and shellfish farms benefit from the cultivation of algae: the algae provide oxygen, shelter and nutrients; while the algae benefit from the CO₂ and organic waste (nutrients) released by these species. These functional associations give the possibility to create multi-species permacultures respectful of the environment (7),(8).

In Japan, where seaweed represents up to 10% of the diet, we notice very few health problems such as breast cancer in Japanese women (probably related to their probiotic content, and anti-cancer elements)(9). China, the world’s largest producer of seaweed (10), produces 10 million tons of seaweed per year, for its population of one billion people.

The use of algae as biomaterials is now a much sought-after alternative in response to the excessive production of petroleum-based plastics. Many startups are working to replace petroplastic by creating bags, water bubbles and packaging from algae: bioplastics (11). The proliferation of sargassum and green algae has become the symptom of deregulated intensive agricultural models (12), with harmful consequences for biodiversity and human societies (13); these innovations present a way to valorize our biological pollution, and credible alternatives to petrochemicals, while capturing part of the atmospheric carbon.

Several applications in animal husbandry and terrestrial agriculture are envisioned. Part of the feed for animal breeding could be substituted by algae, the production of which requires neither water, nor fertilizers, nor agricultural soil. According to some studies, if 20 g of algae were consumed by cows each day, the methane emission of their burps could be reduced by 90% (Asparagopsis taxiformis) (14). They can also be used as fertilizers or phytosanitary for certain crops (15). 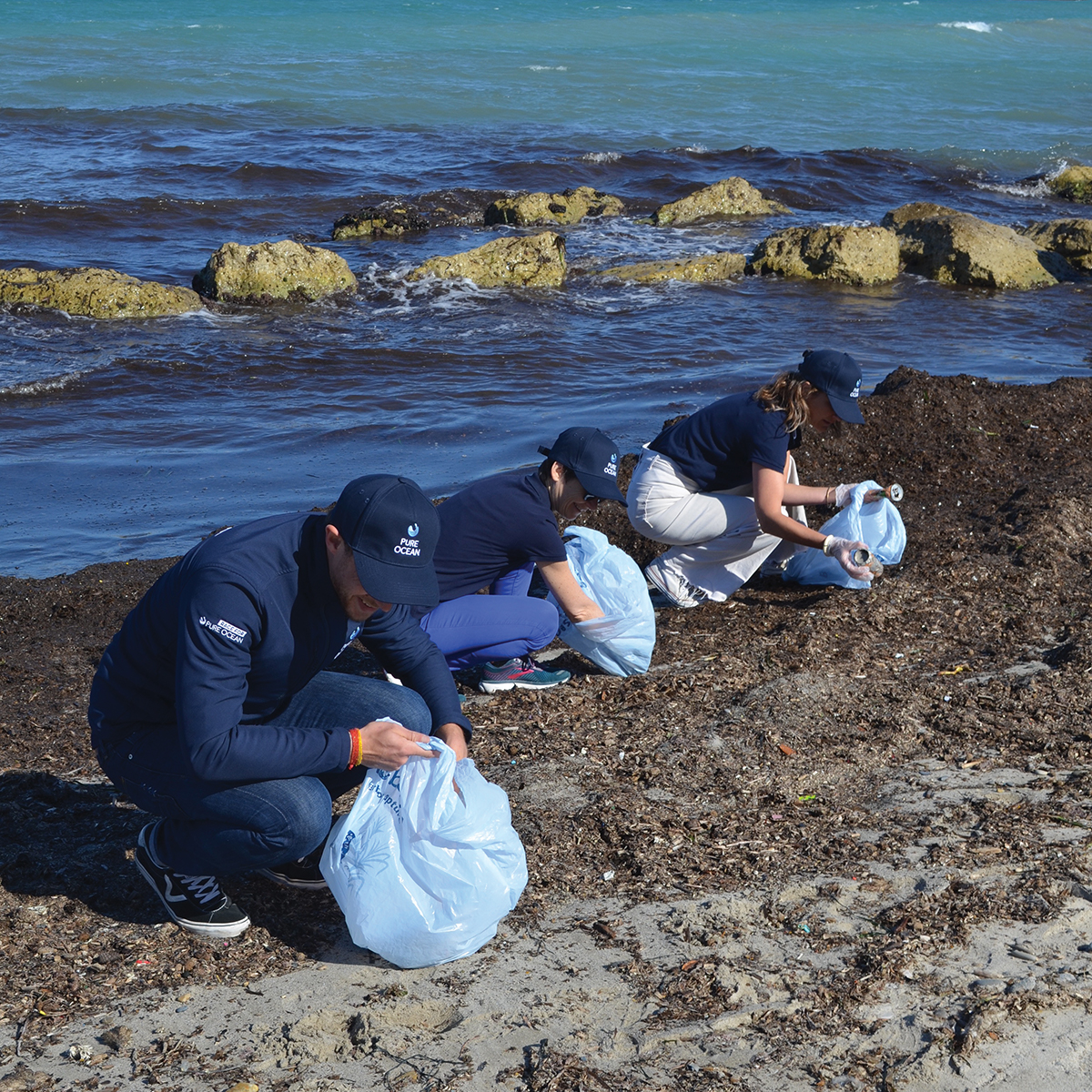 According to the European Commission, which adopted on November 15, 2022 a communication entitled “Towards a strong and sustainable EU seaweed sector”, and which presents 23 proposals to promote the cultivation of seaweeds: “The farming of macroalgae can help regenerate the ocean and seas by removing nutrients that cause eutrophication. It has a low carbon and environmental footprint and a promising potential for carbon sequestration.” (16).

But for this to happen, it would be necessary not only to democratize the consumption of seaweed in our European culture, but also to share the knowledge about its cultivation. With only 50 years of algaculture behind us, we lack data on the potential ecological impact of large-scale algae cultivation. 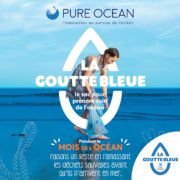 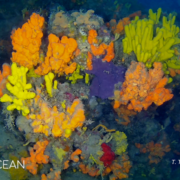 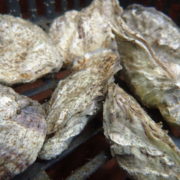 ⇒ Since May 2021, La Goutte Bleue, an initiative by Pure Ocean, has been offering bags made in France from seaweed that can collect up to 30 liters of waste left in nature.

⇒ Archipelagos Institute of Marine Conservation introduces a project to develop and use innovative technologies to locate and monitor coralligenous reefs in the Aegean Sea, and enforce the trawling ban on these biodiversity hotspots.

⇒ The AMTI project is led by The Institute of Marine Science and Limnology and supported by Pure Ocean.

The purpose of the project is to explore the potential of innovative land-based aquaculture and to promote the development of this technology to protect the fragile marine ecosystems of the Caribbean.

(8) Micro-algae as a source of nutrients for Daphnids

(10) The consumption of seaweed as a protective factor in the etiologybreast cancer: proof of principle

(13) Sargassum invasion in the Caribbean: the role of medical and scientific cooperation

(15) Algae as Bio-fertilizers: Between current situation and future prospective