PURE OCEAN IS PUBLISHED IN THE FIGARO – ARTICLE 1 – GILLES BŒUF TALKS ABOUT HIS VISION OF THE OCEAN!

On June 8th, Le Figaro opened its pages to Pure Ocean, but also to its #sponsors, partners and ambassadors and other distinguished guests, to remind the importance of the ocean and the absolute urgency to preserve it today.

We are delighted to offer you an interview with Gilles Boeuf, oceanographer, specialist in environmental physiology and biodiversity, and member of the Pure Ocean Scientific Committee. In a few lines, Gilles Bœuf sums up his vision of the ocean. Indeed, the man who was for 7 years President of the National Museum of Natural History, takes a benevolent and objective look at the state of the ocean and its biodiversity.

Discover his words in the article on the front page 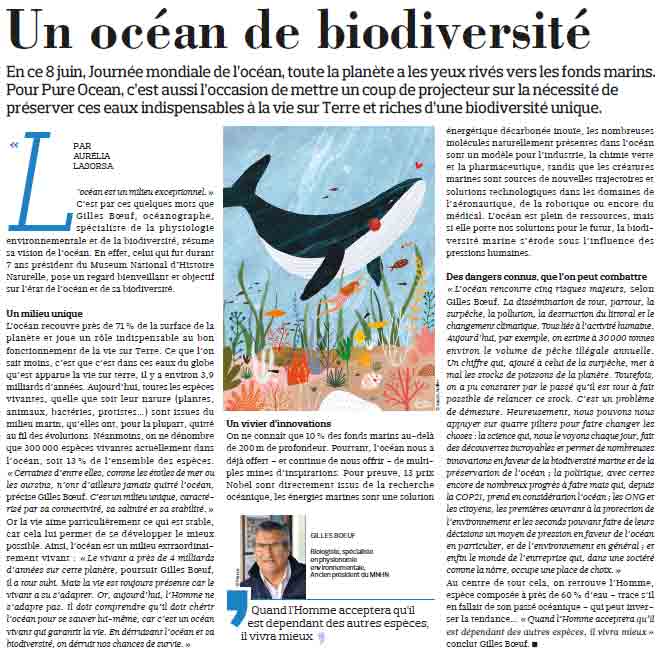 ” “The ocean is an exceptional environment”. With these words, Gilles Boeuf, oceanographer, specialist in environmental physiology and biodiversity, sums up his vision of the ocean. Indeed, the man who was president of the National Museum of Natural History for 7 years, takes a benevolent and objective look at the state of the ocean and its biodiversity.

The ocean covers nearly 71% of the planet’s surface and plays an indispensable role in the proper functioning of life on Earth. What is less well known is that it was in these waters that life on earth first appeared, some 3.9 billion years ago. Today, all living species, whatever their nature (plants, animals, bacteria, protists, etc.) originate from the marine environment, which they have, for the most part, left over the course of evolution. Nevertheless, there are only 300 000 living species currently in the ocean, i.e. 13% of all species.

Some of them, such as starfish and sea urchins, have never left the ocean,” explains Gilles Boeuf. It is a unique environment, characterised by its connectivity, salinity and stability.

Life particularly likes what is stable, because it allows it to develop as well as possible. Thus, the ocean is an extraordinarily lively environment: “Life is nearly 4 billion years old on this planet,” continues Gilles Boeuf, “it has undergone everything. But life is still present because living beings have been able to adapt. Today, however, humans are not adapting. He must understand that he must cherish the ocean to save himself, because it is a living ocean that guarantees life. By destroying the ocean and its biodiversity, we destroy our chances of survival.

A breeding ground for innovation.

Only 10% of the seabed is known beyond a depth of 200 metres. However, the ocean has already provided us – and continues to provide us – with a wealth of inspiration. For example, 13 Nobel prizes have come directly from ocean research, marine energy is an unheard-of low-carbon energy solution, the many molecules naturally present in the ocean are a model for industry, green chemistry and pharmaceuticals, while marine creatures are the source of new technological paths and solutions in the fields of aeronautics, robotics and medicine. The ocean is full of resources, but while it carries our solutions for the future, marine biodiversity is being eroded under the influence of human pressures.

Known dangers that can be combated” According to Gilles Boeuf, the ocean faces five major risks. The spread of everything everywhere, overfishing, pollution, destruction of the coastline and climate change. All linked to human activity.

Today, for example, the volume of illegal fishing is estimated at around 30 000 tonnes per year. This, together with overfishing, is putting the world’s fish stocks at risk. However, we have seen in the past that it is quite possible to revive this stock. It is a problem of excess. Fortunately, we can rely on four pillars to change things: science, which, as we see every day, is making incredible discoveries and enabling many innovations in favour of marine biodiversity and ocean conservation; policy, which is the basis for the development of the world’s fisheries and aquatic ecosystems; and, last but not least

We can rely on four pillars to change things: science, which, as we see every day, is making incredible discoveries and enabling many innovations in favour of marine biodiversity and ocean preservation; politics, which admittedly still has a lot of progress to make but which, since COP21, has been taking the ocean into consideration; NGOs and citizens, the former working to protect the environment and the latter being able to use their decisions as a means of exerting pressure in favour of the ocean in particular, and the environment in general; and finally, the world of business, which, in a society such as ours, occupies a special place.

At the heart of all this is Man, a species that is almost 60% water – a sign, if any were needed, of its oceanic past.

At the centre of all this is man, a species that is almost 60% water – a trace of its oceanic past – which can reverse the trend… When man accepts that he is dependent on other species, he will live better,” concludes Gilles Boeuf.

La Goutte Bleue, the citizen wave that will preserve the ocean!
Scroll to top