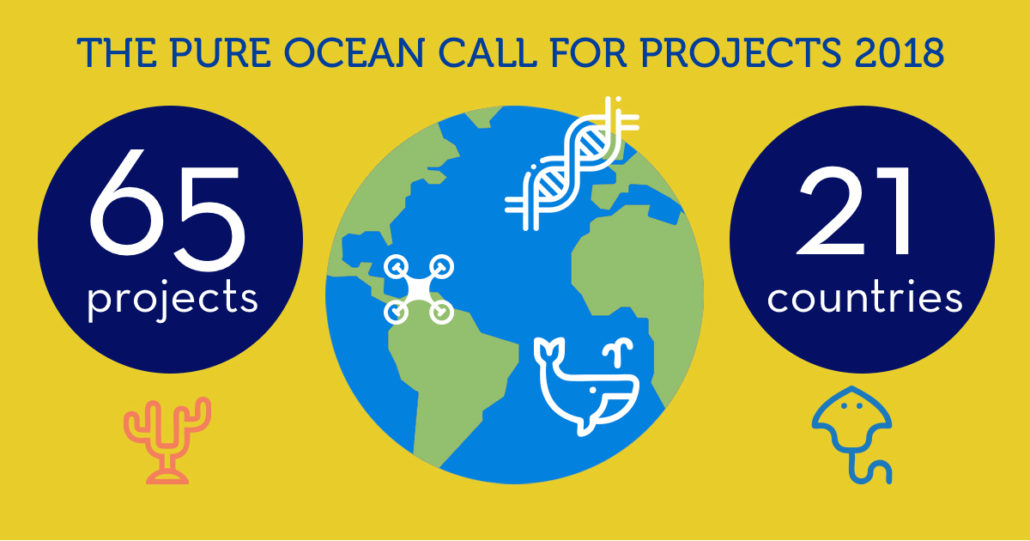 65 applications received for the first Pure Ocean Call for Projects

Launched in April 2018, the first Pure Ocean Call for Projects was a significant milestone for the fund. We received 65 projects from 20 different countries, of which 33% were from France. We also received projects from : 13% UK, 13% USA, 6% Australia, 3% Canada and 2% New Zealand, as well as projects from European countries: Spain and Italy 6%, Belgium and Austria 2%. 12% of proposals came from other countries, including several developing nations, proving that the call for projects succeeded in reaching researchers around the world.

The distribution in the world’s oceans was quite homogeneous:
– Although a majority of projects, 36%, were in the Atlantic Ocean, this concerns many latitudes and various habitat types,
– around 20% in the Pacific Ocean
– 20% in the Indian Ocean
– 13% for the Mediterranean
– Arctic and Antarctic polar zones account for 8% of projects.

The call for projects stipulated three priority themes :
1. Observe and measure changes in marine life, physico-chemical characteristics and their impacts on global dynamics,
2. Sustainable use of marine resources,
3. Identify techniques to restore ecosystems and biodiversity.

Projects also needed to take into account four key criteria :
• Co-construction – Reflecting interdisciplinary collaboration and knowledge sharing among various stakeholders (research institutes, non-governmental organizations, public and private sectors)
• Engagement – Demonstrate passion and determination while bringing together all adequate and realistic resources to effectively change the world.
• Innovation – Improving our current way of interacting with the planet by developing new visions/techniques/methods, three types of innovation will be considered: technological, social and ecological (inspired by Nature).
• Impact – correspond to one or more of the priority themes described above with measurable and sustainable impacts in the short / medium / long term.