Elasmobranchs, what are they ? On the occasion of the ‘Shark Week’ from July 24th to 30th, Pure Ocean invites you to learn a little more about sharks every day!

Shark Week is an initiative carried out by the American documentary channel, ‘Discovery Channel’ for the past 34 years. Initially geared towards sensationalism, it has helped to spread the reputation of ‘man-hunting’ sharks that we know today. Like the issues involved, the event has evolved significantly over the past few decades, and is now dedicated to educating viewers about the threats to sharks and their habitats, and dispelling the myths surrounding their image. By 2022, it has become one of the most followed shark conservation media events around the globe. 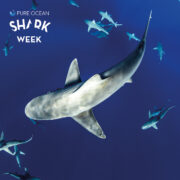 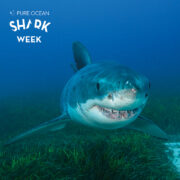 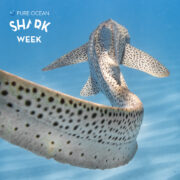 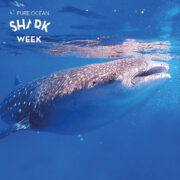 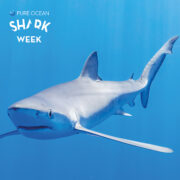 Sharks of the French coast 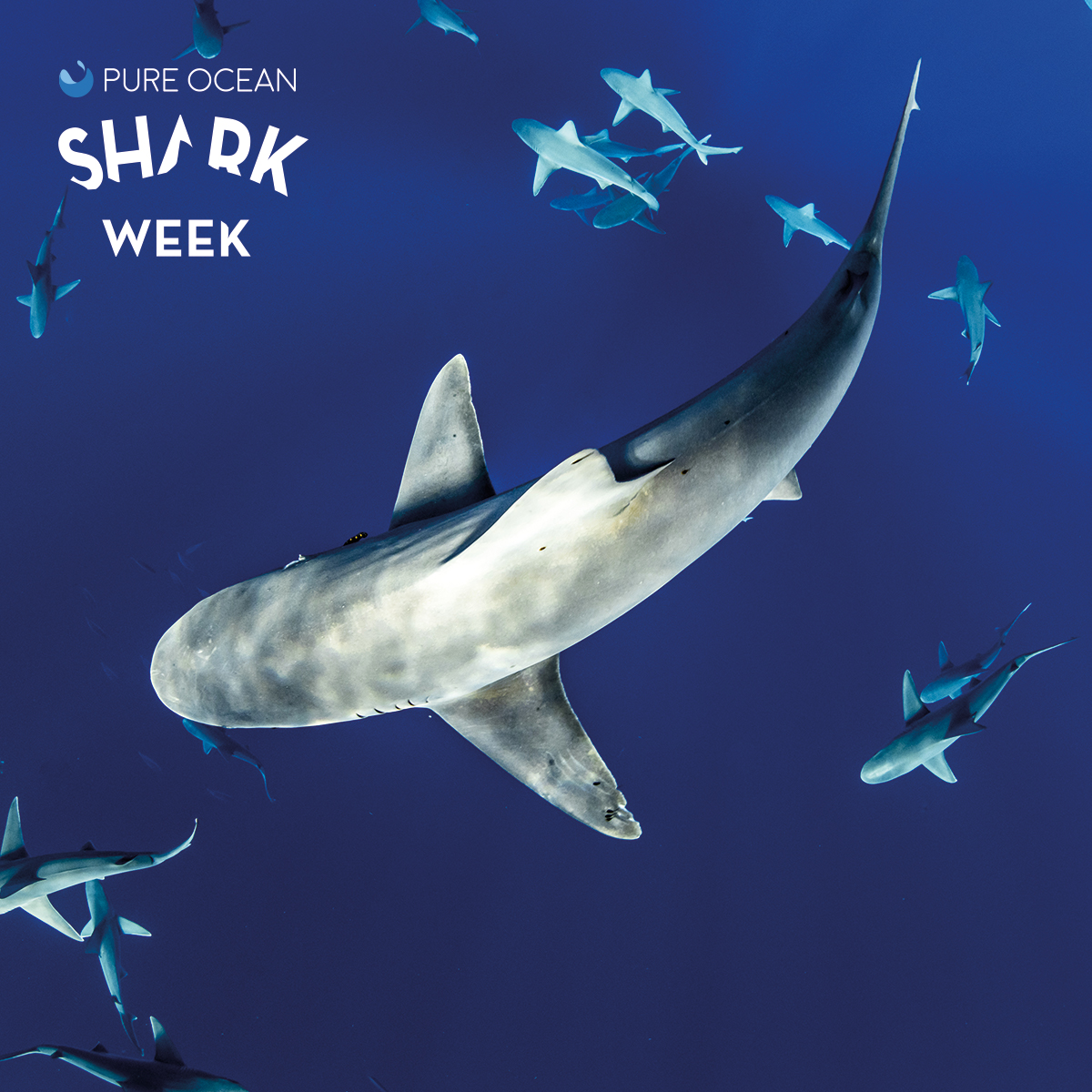 On the occasion of #SharkWeek, Pure Ocean invites you to learn a little more about sharks!
Like rays, sharks are fish with a cartilaginous skeleton, which appeared on earth about 400 million years ago, well before human beings! Today, there are about 500 species of sharks, distributed between the surface and the depths of the ocean.
If some sharks are only a few centimeters long, others, like the whale shark, can measure up to 18 meters long!

Sharks play a major ecological role, as most of them are “top predators”: they regulate the populations of species placed below them on the food chain by removing sick or weakened individuals.

Although they are often presented, wrongly, as a danger to humans, humans are a real threat to sharks: 70% of sharks and pelagic rays have disappeared from the ocean in half a century, due to overfishing.

The image of ‘man-eating’ sharks is not new. According to some ancient historians, the name ‘shark’ is even derived from the Latin prayer ‘requiem’.

This bad reputation has definitely settled in the modern media after the publication of the novel Jaws by the journalist Peter Benchley in 1974, then by the film adaptation by Steven Spielberg the following year. Since then, the two men have never hidden their regrets about the cultural influence of this fiction, and have subsequently become very involved in shark conservation and the protection of the marine environment.

It must be said that the balance sheet is uneven: on a global scale, for every 10 fatal shark attacks, more than 100 million sharks are killed each year. Statistically, the risk of death is much higher by lightning strike (10,000 per year) or even a coconut fall (~150 per year)! In comparison, 725,000 deaths per year are attributable to the consequences of mosquito bites. Only 3 species of sharks are involved in these attacks (bulldog, great white and tiger sharks), mainly because of… their failing eyesight!

It is urgent to protect sharks, especially by changing the undeserved reputation of these precious marine animals, threatened in all seas of the world. Let’s bet that the well-furnished smile of this great white shark convinces you. 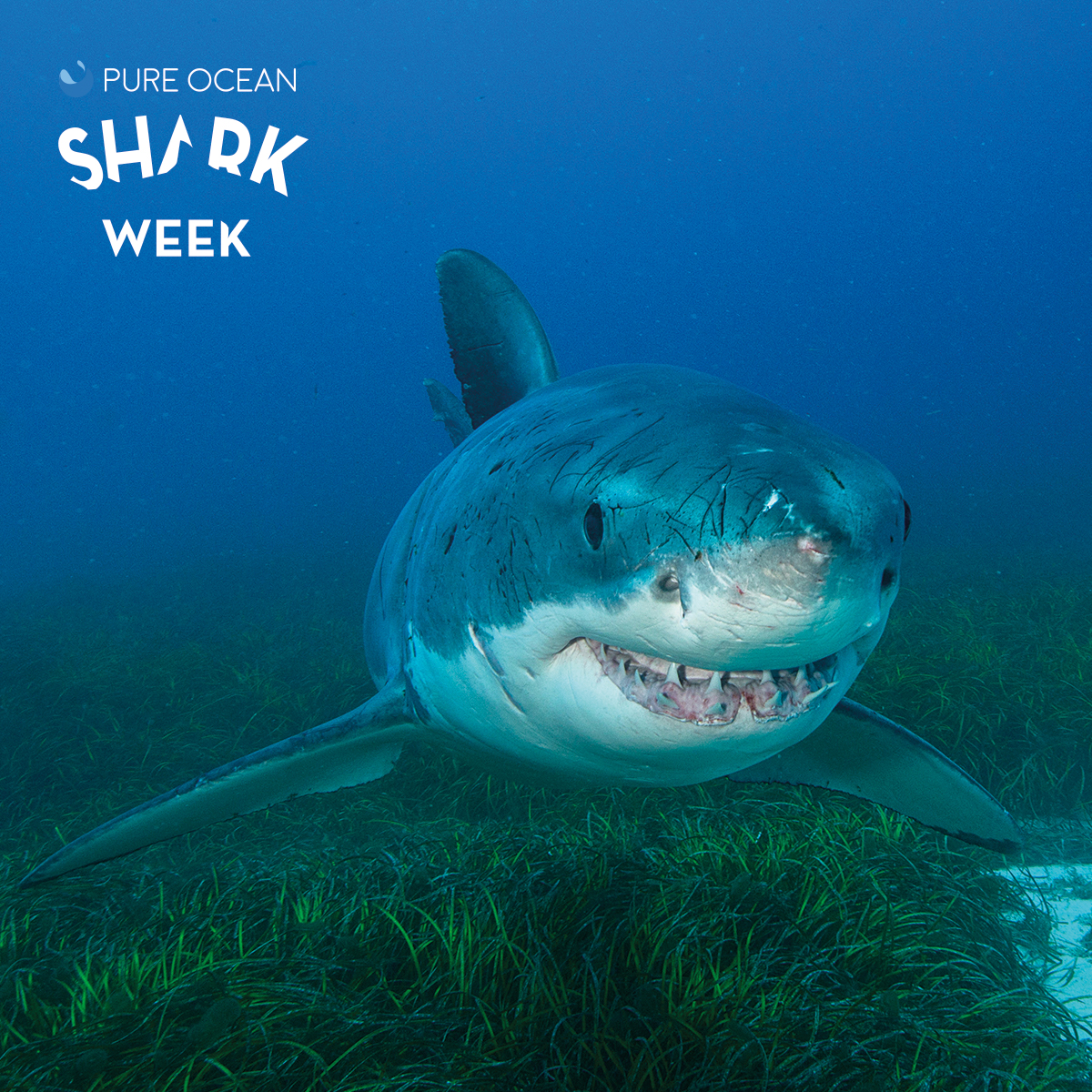 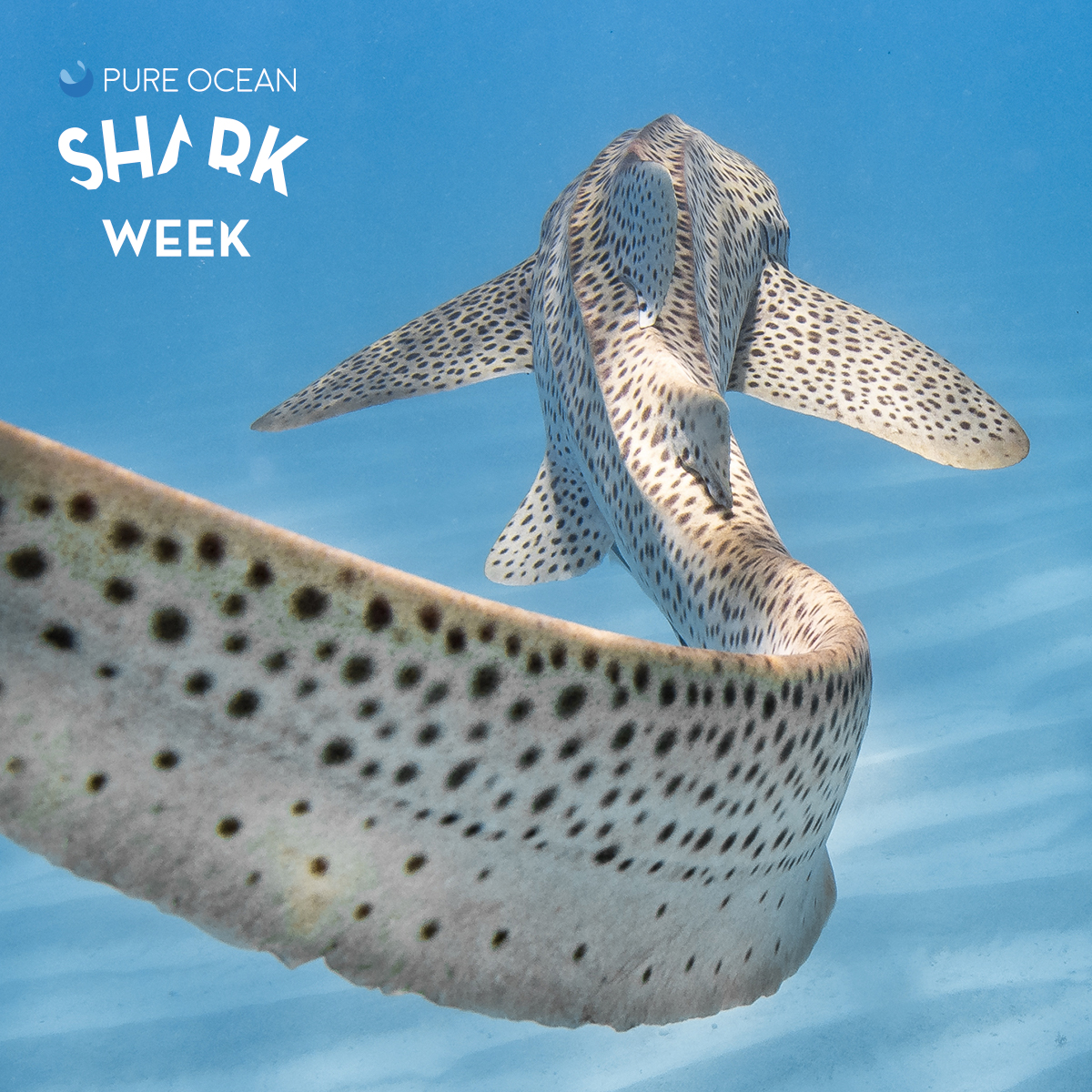 All around the world, shark populations are in free fall: there is 70% less of them today than there was at the peak of the Cousteau expeditions, only 50 years ago. One species out of two is threatened with extinction in the Mediterranean, and one out of three on average in the world ocean.

Targeted overfishing: fins are highly prized in Asian markets for the preparation of soups, “luxury” meals that are now being democratized for hundreds of millions of consumers. Although finning is prohibited in the Mediterranean, it is still widely practiced everywhere else, including in European waters.

By-catches: individuals, especially among pelagic species, are trapped by non-selective fishing methods. They are then discarded dead in the environment, or sold for consumption (except for some species, the French law allows this). Labels and certified fisheries tend to limit this impact.

The destruction or degradation of their living environment by human activities on a local (coastal development, bottom trawling, etc.) or global (climate change) scale. For example, species living in coral reefs, such as the leopard shark (pictured), depend on the good health of corals, which are now directly impacted by the warming of surface waters.

These pressures are aggravated by the low reproductive capacity of sharks. Gestation is long (often more than 1 year), few pups per litter (2 to 20), and sexual maturity is very late (33 years for the female great white shark!).

Did you know that the largest sharks eat the smallest prey!

The whale shark (pictured) is now the largest fish living on Earth. It can reach 34 tons and 18 meters long… feeding exclusively on microplankton (algae and animals often smaller than a millimeter).

Majestic animal, it is perfectly harmless for Man and makes the happiness of the divers who have the chance to encounter it. It lives in the warm waters of the Atlantic, the Pacific and the Indian Ocean. In the Mediterranean, it is more common to meet its close relative: the basking shark. Both are classified as Endangered by the IUCN (International Union for Conservation of Nature).

In comparison, the great white sharks, famous carnivores of the cinema, do not exceed 3 tons and 6 meters long…

On the other hand, the cookiecutter shark is one of the smallest sharks on the planet (as an adult, it measures less than 50 cm). Inhabitant of the abysses, it hunts by attaching itself to large marine animals with its powerful jaws, to cut slices of flesh. Small, but powerful.

The ‘big’ predators are not always the ones we think! 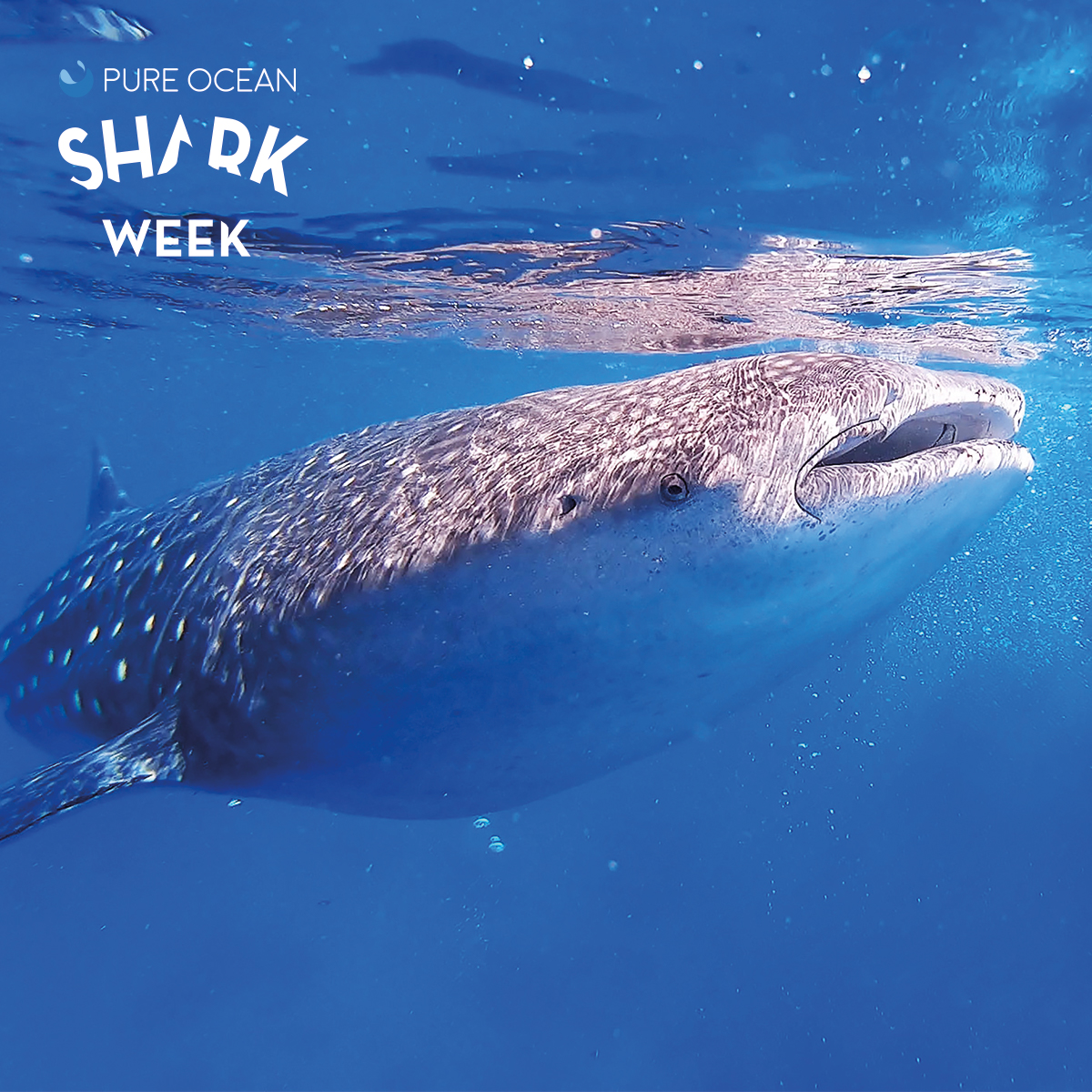 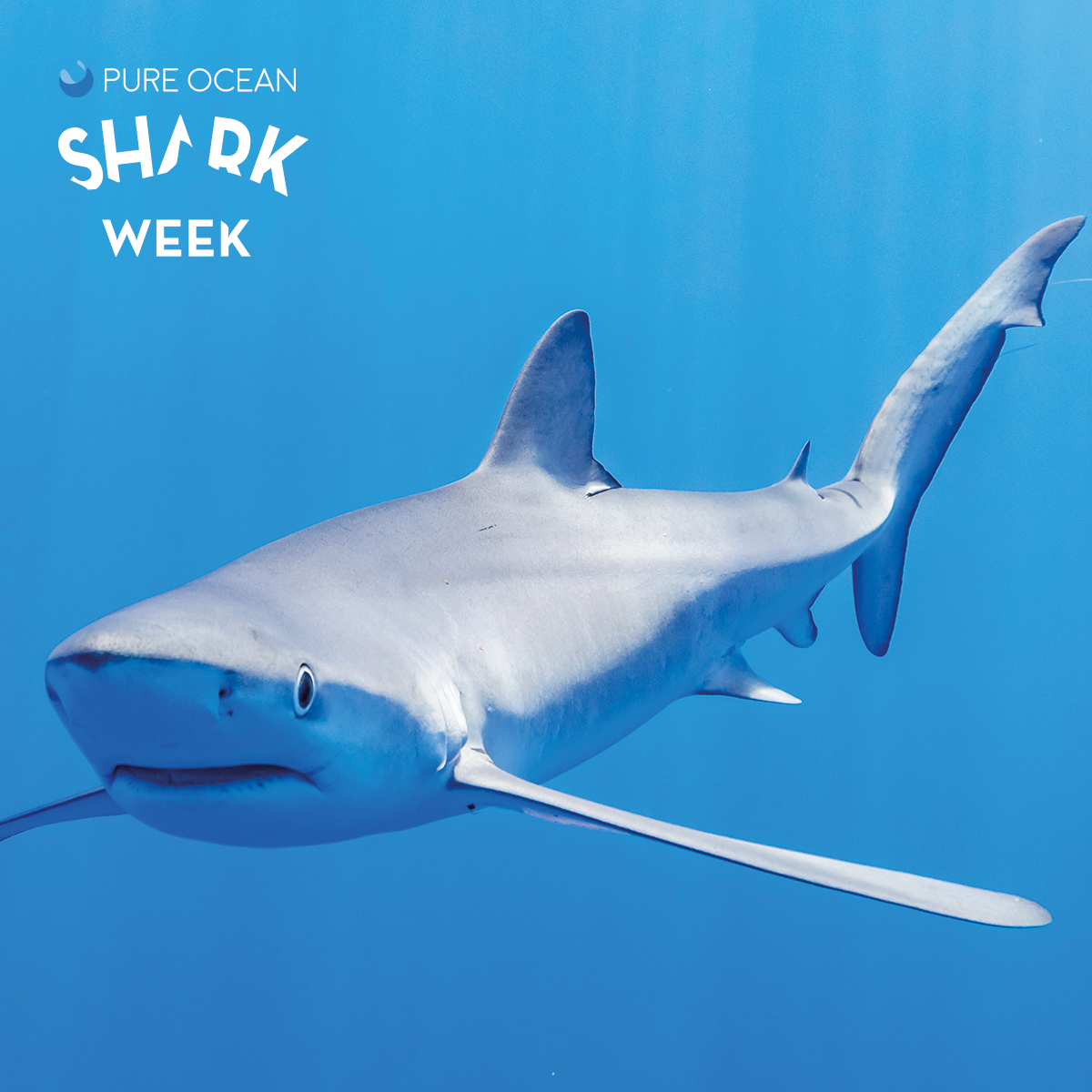 It is estimated that about forty species are present in the northern Mediterranean, and about a hundred on the Atlantic coast. Among them, large pelagic sharks such as the blue skin shark (pictured, the most fished species in the world), the porbeagle shark, the basking shark, the mako shark, but also the famous great white shark. On the seafloor, the common benthic sharks on our coasts are dogfish, the Hâ shark, spiny dogfish and smoothhounds.

Let’s also note the -extremely rare- presence on our coasts of angel sharks, benthic sharks flattened like rays, classified as ‘Critically Endangered’ according to the IUCN.

The state of protection of sharks in France varies according to the species, but remains very insufficient. The international conventions on the protection of wild fauna and flora, from Barcelona (1976) to Bern (1979), are not systematically applied by decrees on a national scale. To date, French law authorizes, for example, the sale and consumption of sharks (including protected species), if their capture is “accidental”. Not without maintaining a certain legal ‘vagueness’ among consumers…