The ocean covers 70% of our planet and represents 97% of the water on earth. It connects humans, provides food and oxygen, regulates our climate by absorbing nearly a quarter of the CO2 produced and shelters a great diversity of species. 250,000 species have been discovered, while it is estimated that there are between 2 and 5 million. So 9 out of 10 species still remain to be discovered.

But the ocean is in danger! Between global warming, plastic pollution, overfishing, loss of biodiversity, destruction of habitats, the challenges are enormous.

Our ambassadors have decided to get involved with Pure Ocean to raise public awareness of the importance of protecting the ocean and marine biodiversity and to publicize the foundation’s actions. The role of the ambassadors, both through their fame and their activity, is to raise awareness, to give visibility and to contribute to the support of scientific projects.
Convinced that sport is a vector of transmission, their commitment is essential in order to spread values and convictions around respect for nature.

Arnaud Jerald is the rising star of apnea. Born in Marseille in 1996, he grew up near the sea and made it his adventure ground. He discovered apnea with his father. Suffering from dyslexia, it is in the ocean and thanks to apnea that he finds himself.
He enters competitions in 2017 and surprises the freediving world with three national records.
In 2019, he snatched the new world record in constant weight dual fins by diving to a depth of 108 meters. He has just renewed the performance in September 2020 by diving to 112m.
In 2021, he settles a new world record by diving to 117m during the Vertical Blue in Bahamas. He become world champion during the Freediving championship in Turkey. In August 2022 he broke the record twice with a descent to 119m and one to 120m! 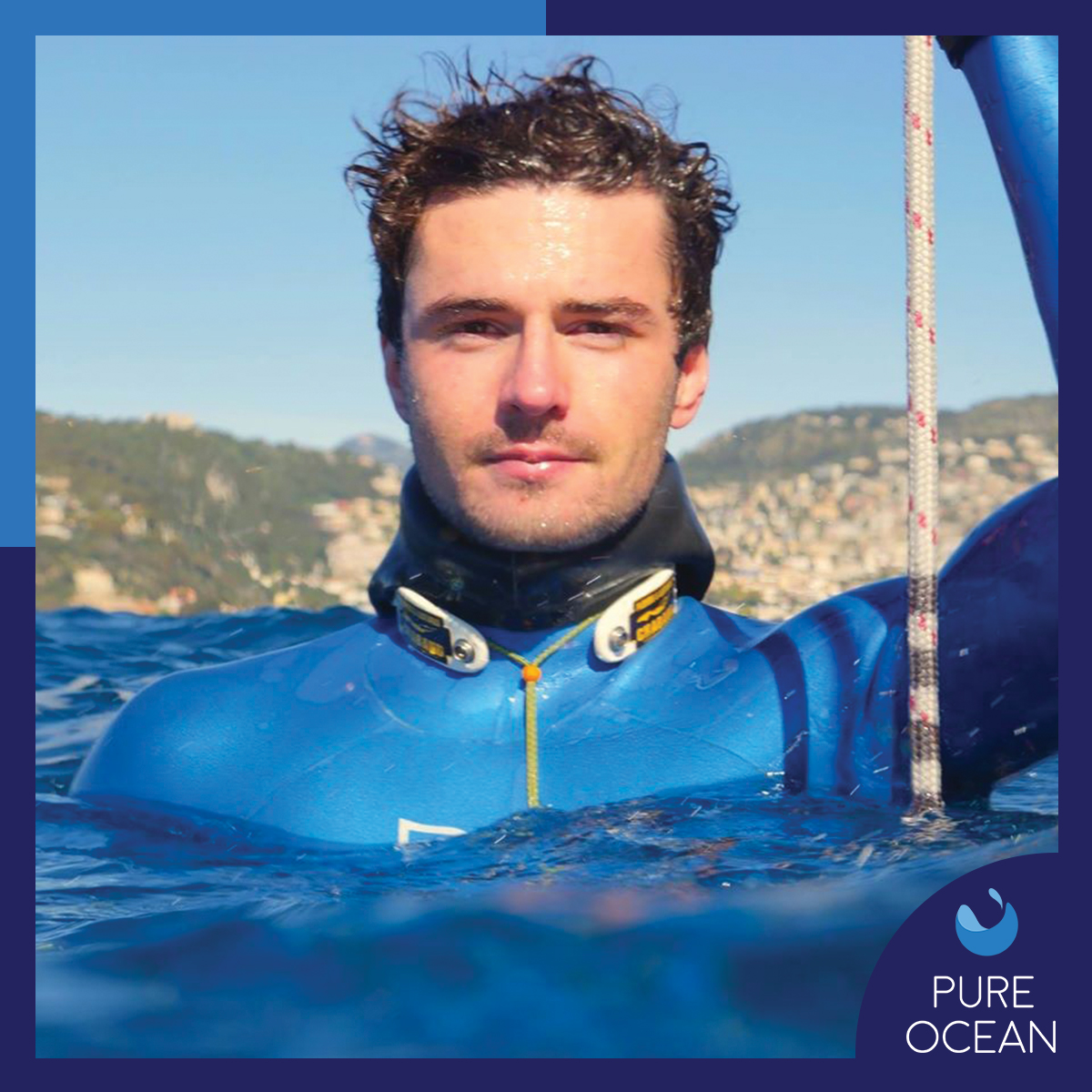 Jean Pierre Dick is a French skipper and navigator who is not to be introduced anymore. Since the 90’s he has made a name for himself in ocean racing, winning the Barcelona World Race twice, the Transat Jacques Vabre four times and 4th in the Vendée Globe in 2013 and 2017.
An outstanding sailor, he was named “Sailor of the Year” in 2011.
A well-known ambassador, Jean Pierre Dick has already raced under the Pure Ocean colors in 2020 during the St Pierre Lorient route. A challenge allowing him to beat the symbolic record of Eric Tabarly and to collect scientific data for the benefit of ocean research.
In 2022, he attempted a new record during the Bermuda Lorient – Pure Ocean Challenge ! 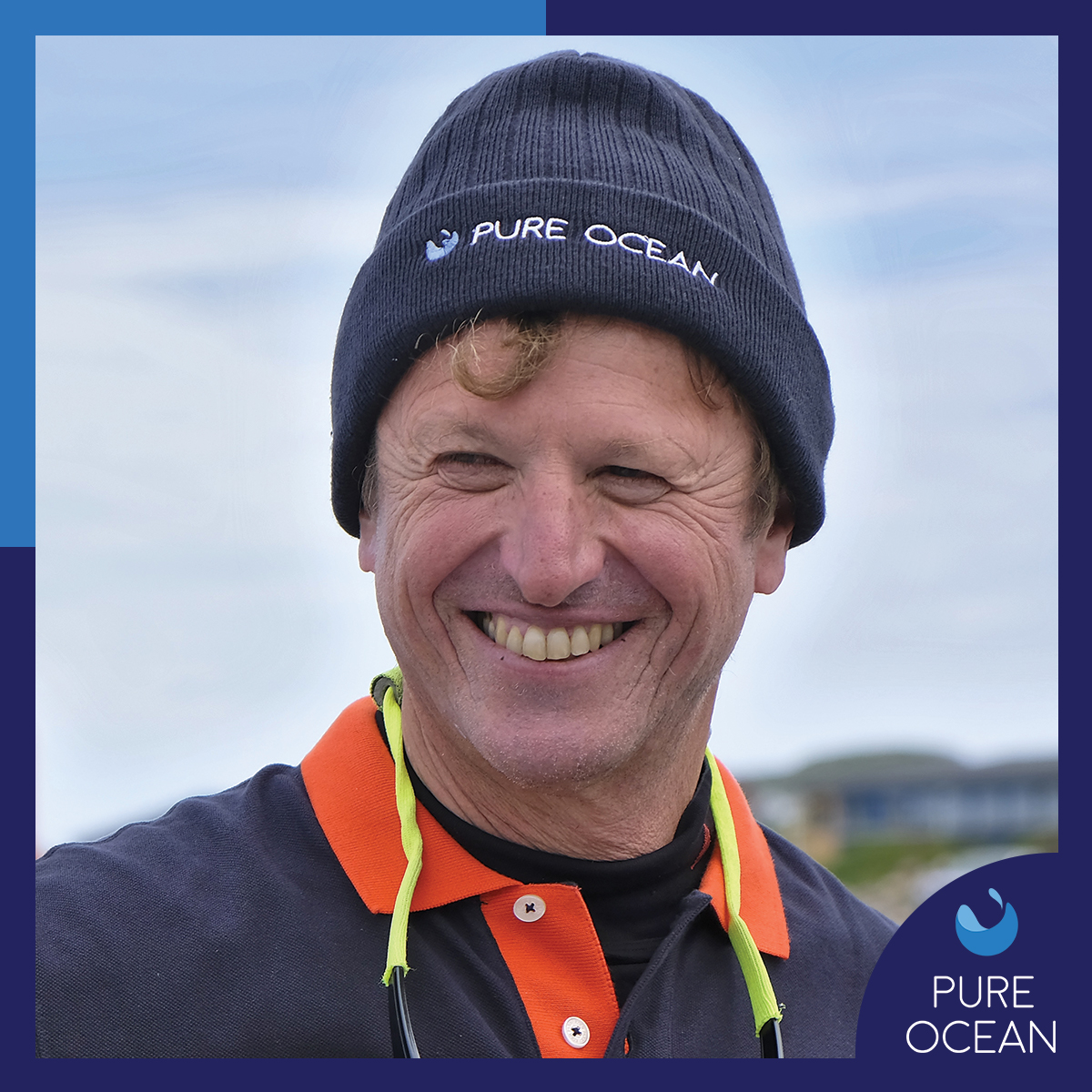 Daughter of the famous navigator Philippe Poupon, Morgane was born the year that her father won the “Route du Rhum” in 1986. Growing up in La Trinité, the young girl began to sail the ocean at a very early age, accompanied by her father. Great sailor, skipper and trainer as well, Morgane raced under the colors of Pure Ocean during the 1st edition of the Route St Pierre Lorient. Beyond her sailing career, the Frenchwoman is a specialist in sustainable development, she likes to observe nature and work for its protection. 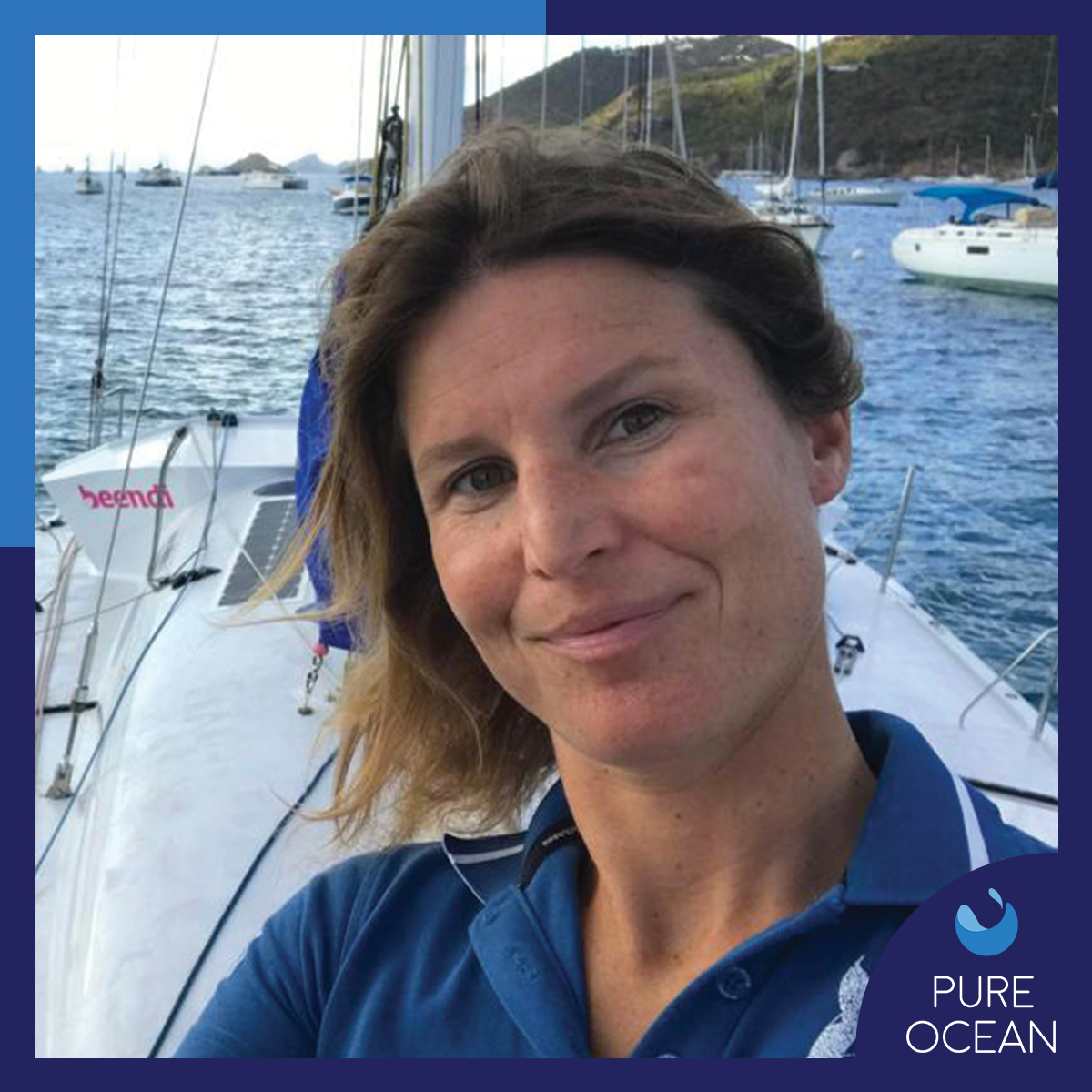 Skipper and sports journalist, Sébastien Destremau is the first Mediterranean sailor to finish the Vendée Globe. In 2018, he finished second in the “Route du Rhum”, strengthening his status as a great French skipper.
Sébastien is above all a committed sailor who lives the race differently, at his own pace. His race is the one against the climate emergency and the destruction of biodiversity.
His motivation is not about winning but about discovering and meeting the Ocean.
This year, Sébastien set sail on board his new “Merci” boat, in the Pure Ocean colors, towards his 2nd Vendée Globe, always with the aim of sending a strong message of meaning. 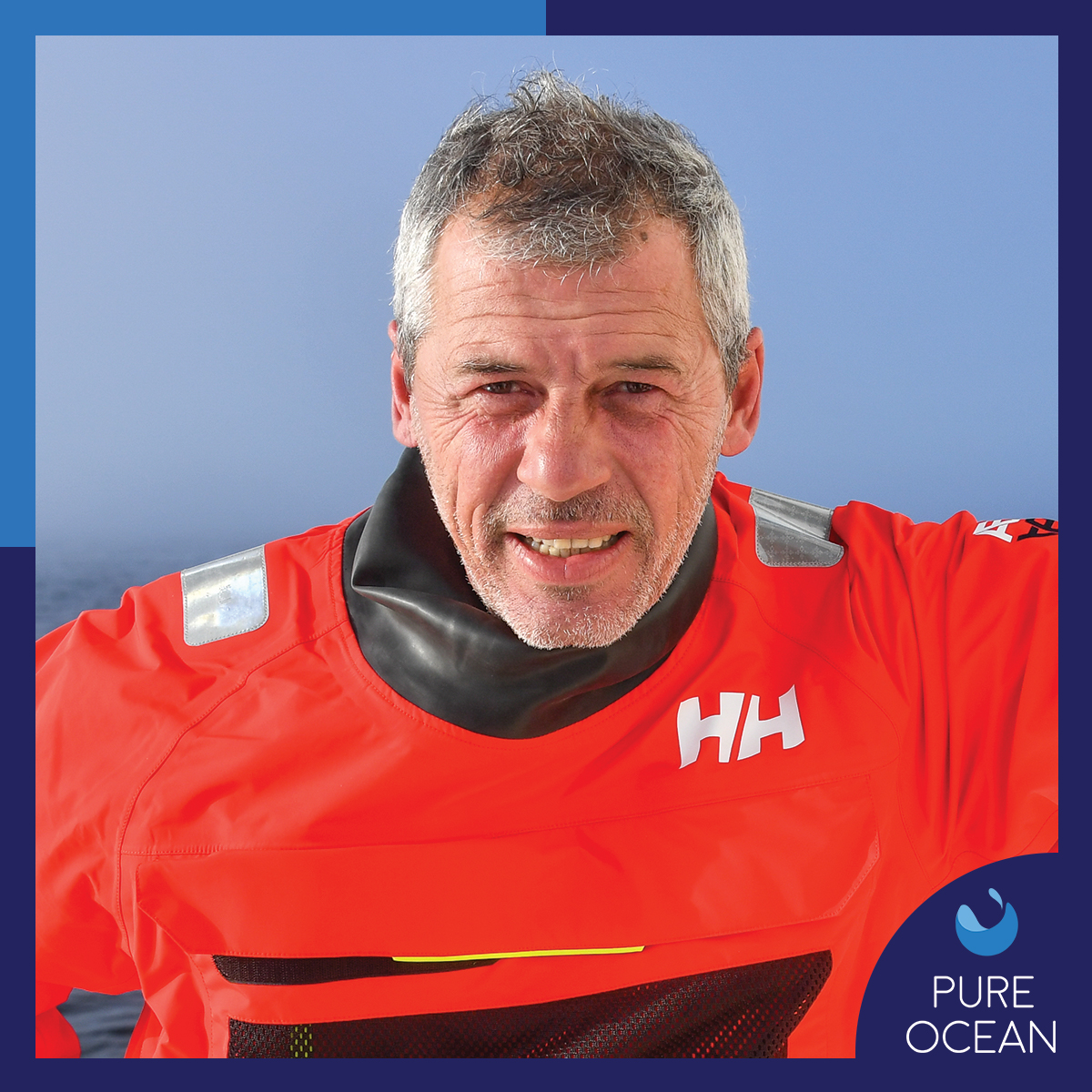 The Frenchman discovered canoeing at the age of 12 thanks to his aunts and uncles. Quickly determined to excel in the slalom category, the French canoeist quickly won the French downhill and slalom championships. Denis climbed national and international steps at a young age, pushing him, at the age of 18, to leave Marseille for Pau where the structures and the natural river would contribute perfectly to his progress. Despite a double failure in 2012 for the London Olympics qualifications, the Frenchman remains an outstanding competitor. Denis went back to training and changed coaches until the Olympic Games in Rio in 2016 where he was crowned Olympic champion in C1.
2021 european champion, Denis wants to continue, but bring something new. These changes require a willingness to commit to a cause that drives him: the protection of the oceans. 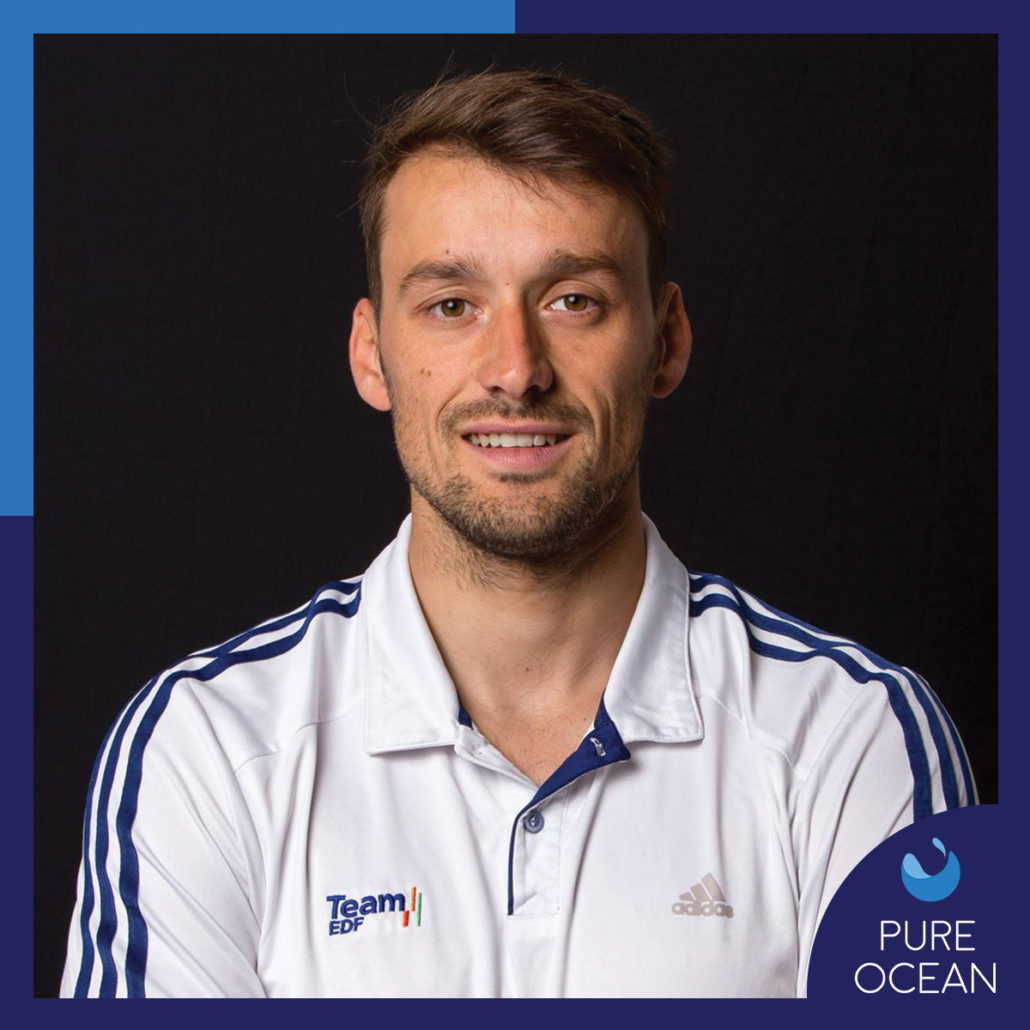 NatureWomen Challenge is the story of 4 extraordinary girls, united to achieve, in a non-stop relay, a crossing from the English Channel to the Mediterranean Sea.
Lisa, originally from Germany, is a great sportswoman. Competitor, she likes extreme sports, from mountain biking to ultra marathon races.
Barbara, a native of the Loire Valley, is passionate about outdoor activities. Swimming in open water, mountain biking, trailing, triathlon.. nothing can’t stop her !
Emilie, the youngest of the group, is an experienced kiteboarder, passionate about the ocean and very close to nature. Marseillaise for 5 years, she started triathlon 4 years ago.
Emma, the Normande of the group, is a sporting and professional challenge in her own right.
In August 2020, the 4 Naturewomen completed their XXL triathlon between Dover and Marseille in just under 85 hours, in non-stop relays day and night! A total distance of 1200km swimming, cycling and running for the benefit of the Ocean. 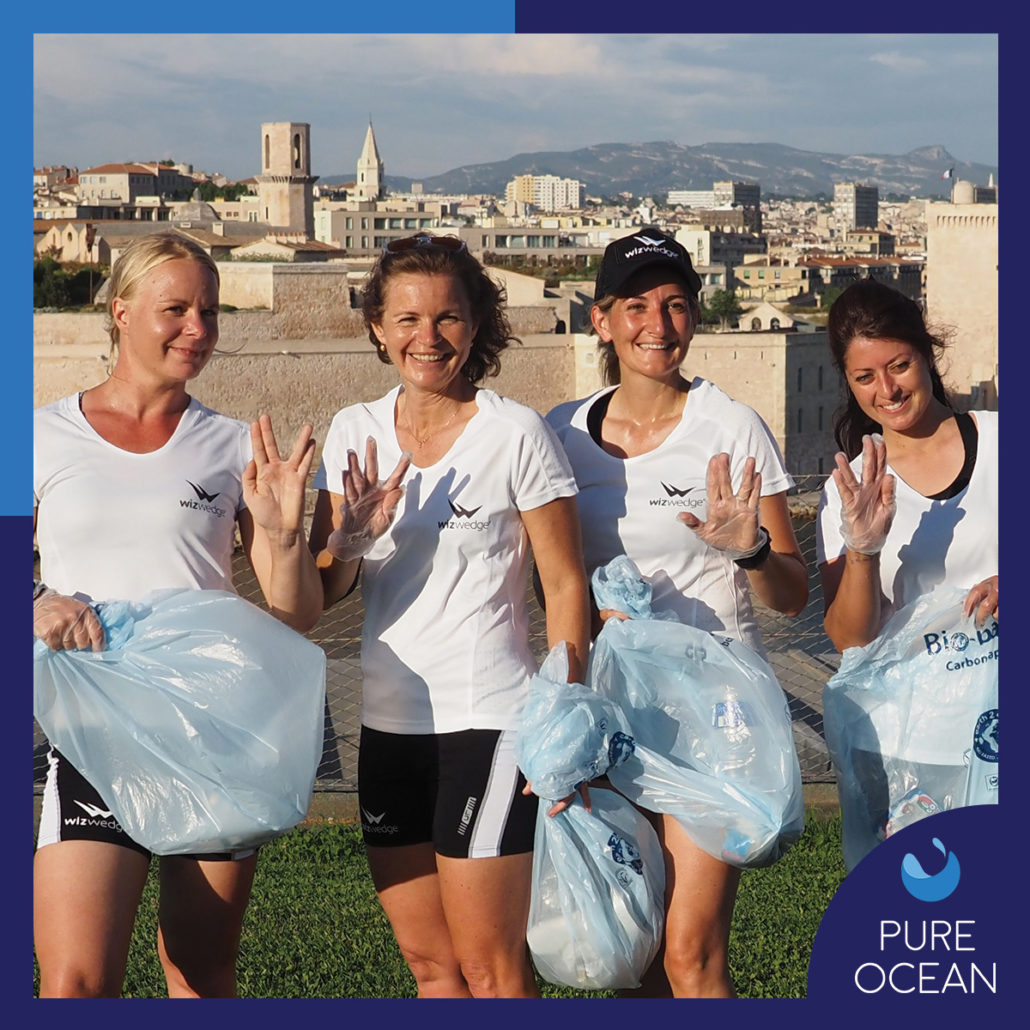 Solenn For Pure Ocean’s challenge is to participate in a number of regattas and cruises aboard the JPK 1080, based in Marseille, skippered by the duo Ludovic Gérard and Philippe Mariani.
They are two great sailors who have a common passion for the ocean and sailing. Unlike in previous regattas, a friendship has developed over the years, leading them to sail on the same boat today, with a strong cause: committing themselves to Pure Ocean.
Having become aware, during numerous regattas, of the pollution of the maritime territory, the two French sailors are committed to working and raising awareness on environmental issues. In addition to other races, they won the Cap Martinique in May 2022! 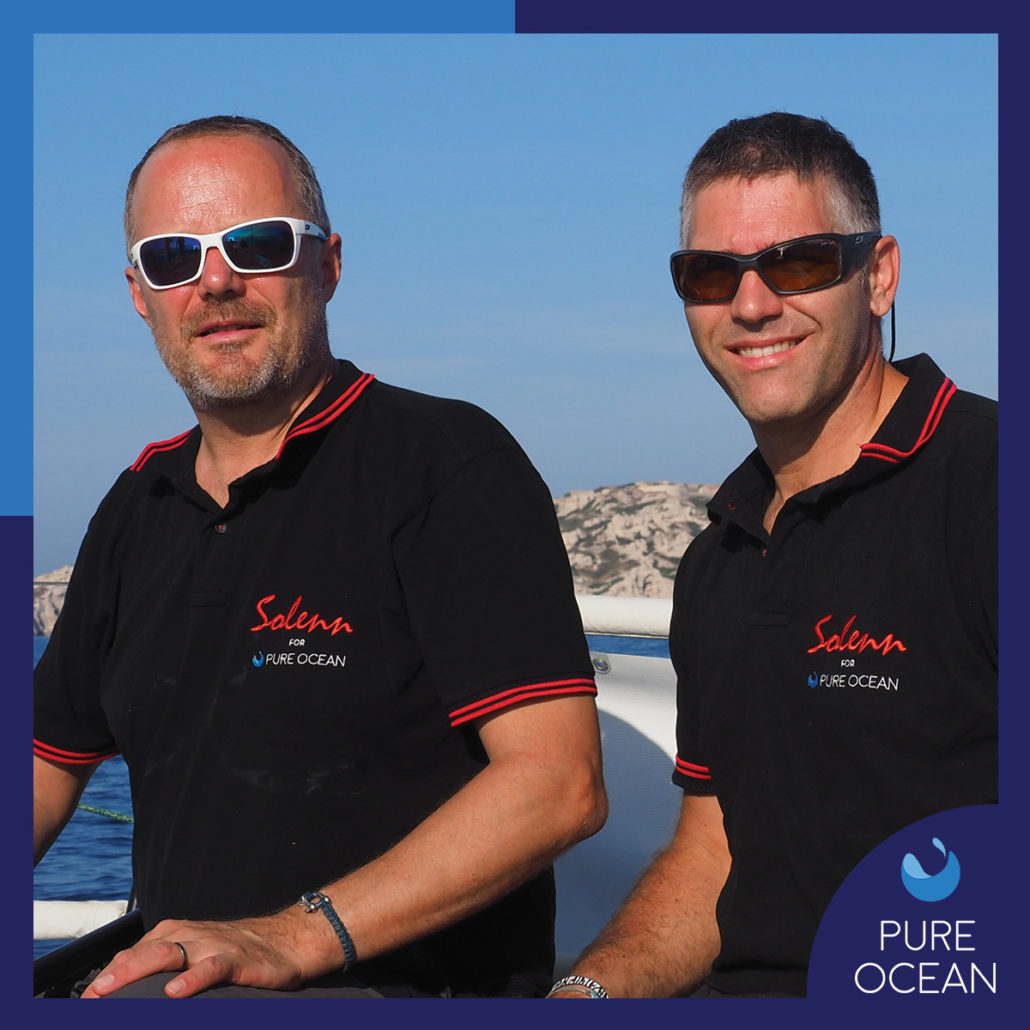 Amaury is a wonderful French bodyboarder. Born in Poitiers, he grew up in Reunion Island where he discovered bodyboarding. His talent quickly allowed him to collect French championship titles, before launching himself into international competitions.
Moz, nickname given to him in Reunion Island, is the first European rider to become World Professional Champion in 2010, with a double in 2014.
He surfs on all the waves of the world: Pipeline, Teahupoo, Chile, Brazil, Mexico, Puerto Rico, Costa Rica, Africa, Indonesia, Australia, Portugal, Canary Islands…
Based in the Canary Islands, the two-time world champion took a break from the world circuit starting in 2018 to develop Amaury Academy, his bodyboarding school, to teach young people and adults his passion for bodyboarding and the ocean, around the world.
Amaury remains determined to win a 3rd World Champion title, when the World Tour resumes.
He wants to turn this sporting project into a strong human mission, as he is committed to Pure Ocean in order to raise awareness and mobilize the new generation to the challenges of marine protection.
Amaury is an outstanding sportsman, a real waterman, committed to a cause that is precious to him: the protection of the Ocean. 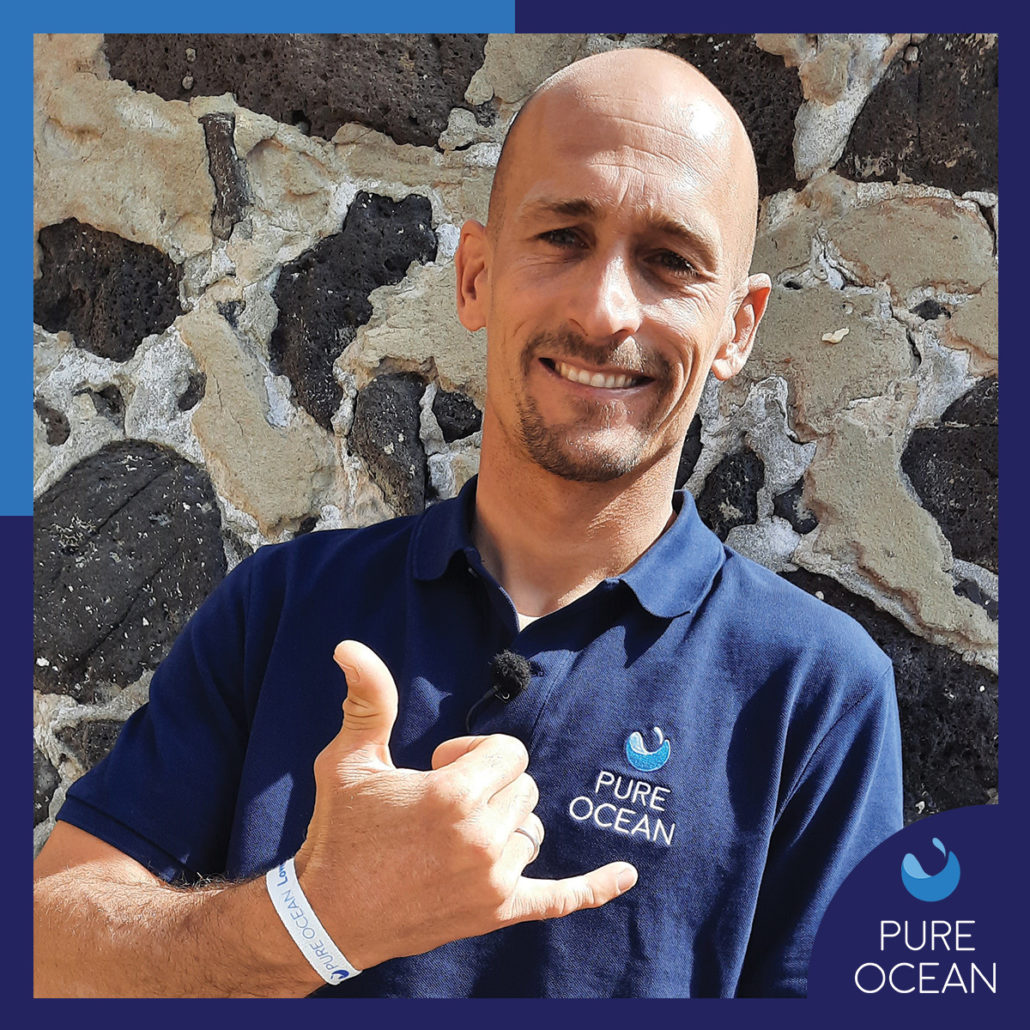 A native of Finistère, Brittany, Marie took her first steps in the ocean and quickly fell in love with this element. She took up sailing and became a high-level sportswoman with the goal of one day participating in the Olympic Games.
She proudly represented France at the 2021 Tokyo Olympics where she placed 11th in the competition.
With several French Champion titles and very good rankings during the World Championships, she is among the best in her category.
Marie is also an employment counselor and is eager to share the values that high level sports have instilled in her.
The sea is a source of well-being and Marie wishes to get involved in the protection of this vital environment. 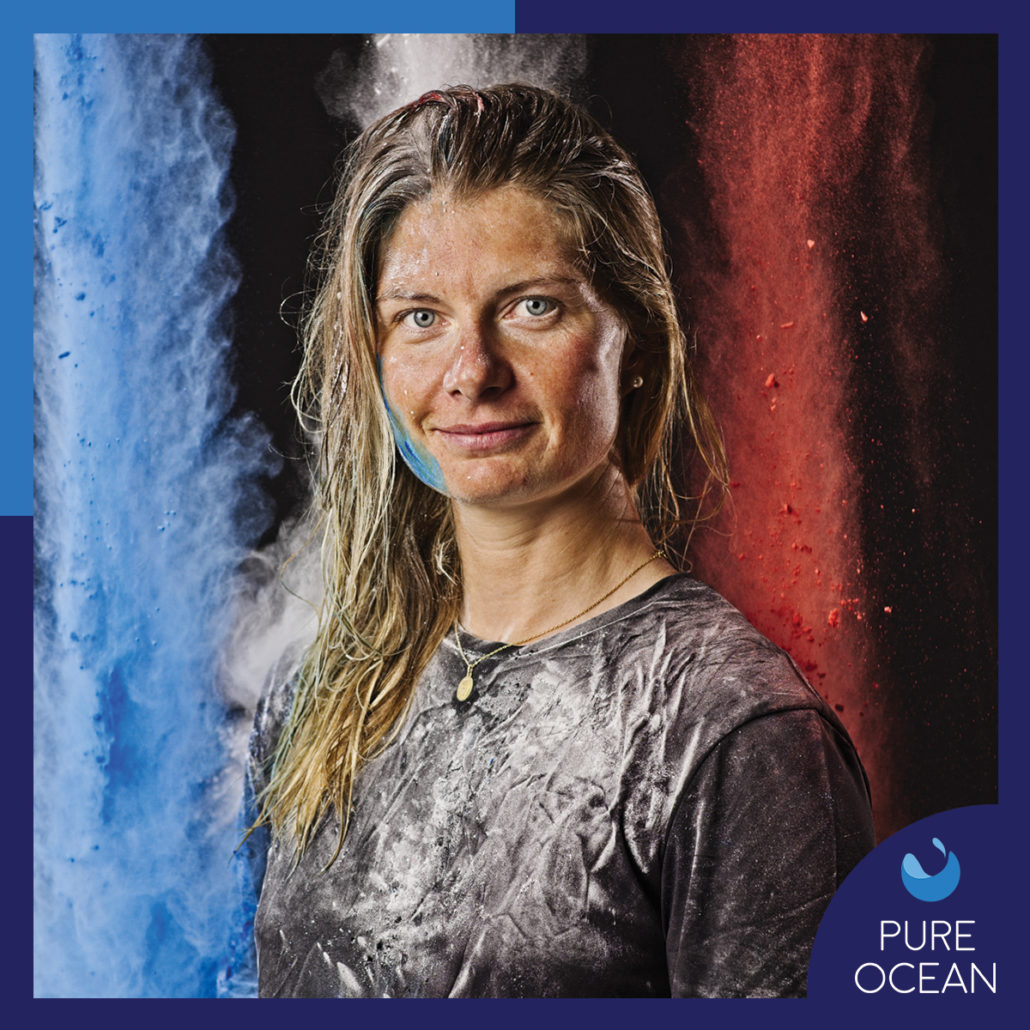 Ambre is a young windsurfer with a bright future and many titles. Having grown up in Martinique, she won the national championships there in 2016 before moving to metropolitan France to join the Pôle France de Voile in Marseille where she also won the French championships the same year. Since then, a first place in the Med Cup in 2019, a fourth place in the French Championship, a participation in the World Championship RSX … A career that begins on the hats of wheels. Specialist of sailing in general, Ambre practices the Olympic support, the IQFOIL with the objective of the 2024 Olympics in Marseille!
Full of will and ambition, she also studied Sports Management.
Her commitment is certain, Ambre spends 365 days a year on the water making the ocean her second home. Deeply impacted by environmental issues, this champion shares with us the desire to make things happen. 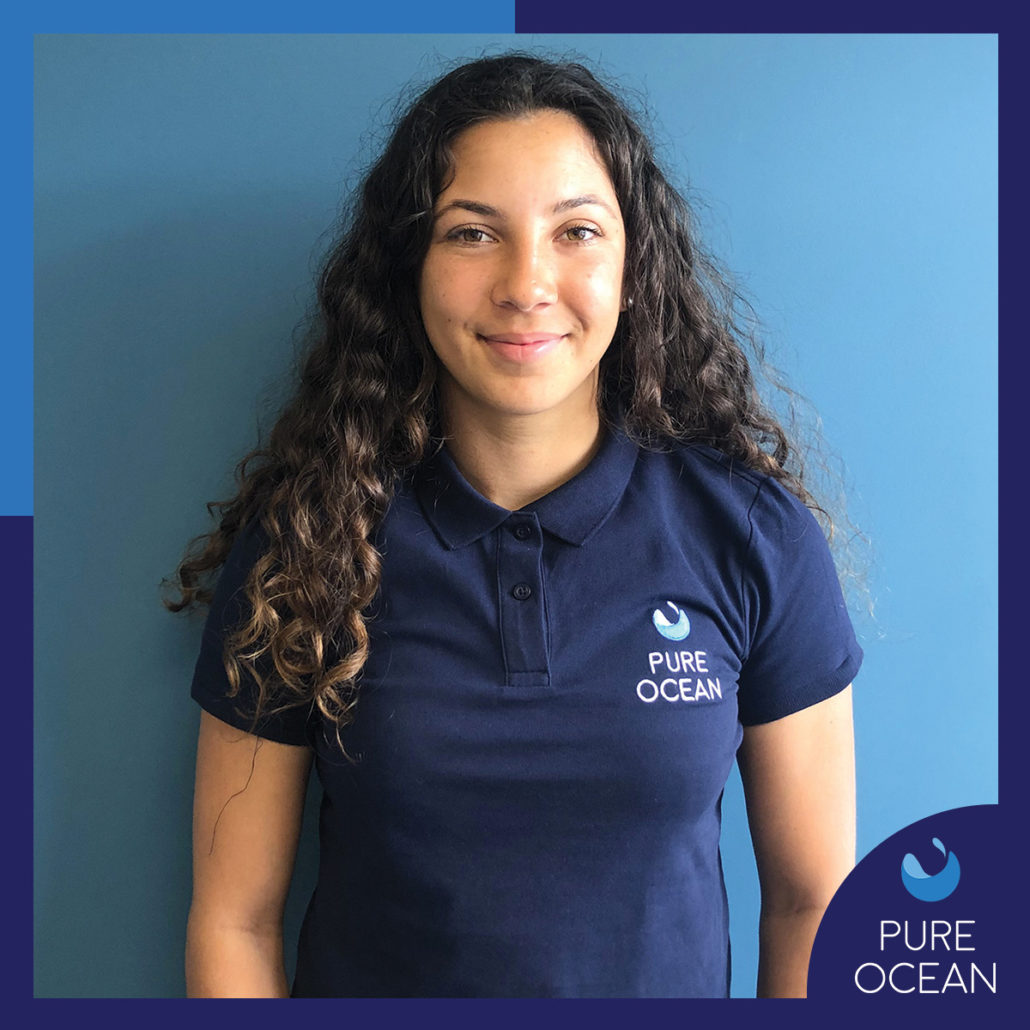 A polyvalent sailor, Virgil has sailed on different types of boats, starting with the RS:X and then the 49er, training at the Pôle France in Marseille. He then sailed as a professional on different series such as Diam24, TP52, Flying Phantom…
“Pleasure, Sharing and Transmission” are his objectives for the 2022 season,
After 2 years of Covid, he wants to return to my passion, sailing around the 69F.
Virgil has decided to live his Olympic dream in a different way: “I want to make things happen in the right way. I dream of winning the Olympics, sailing every day and allowing some people to enjoy it as much as I do.” 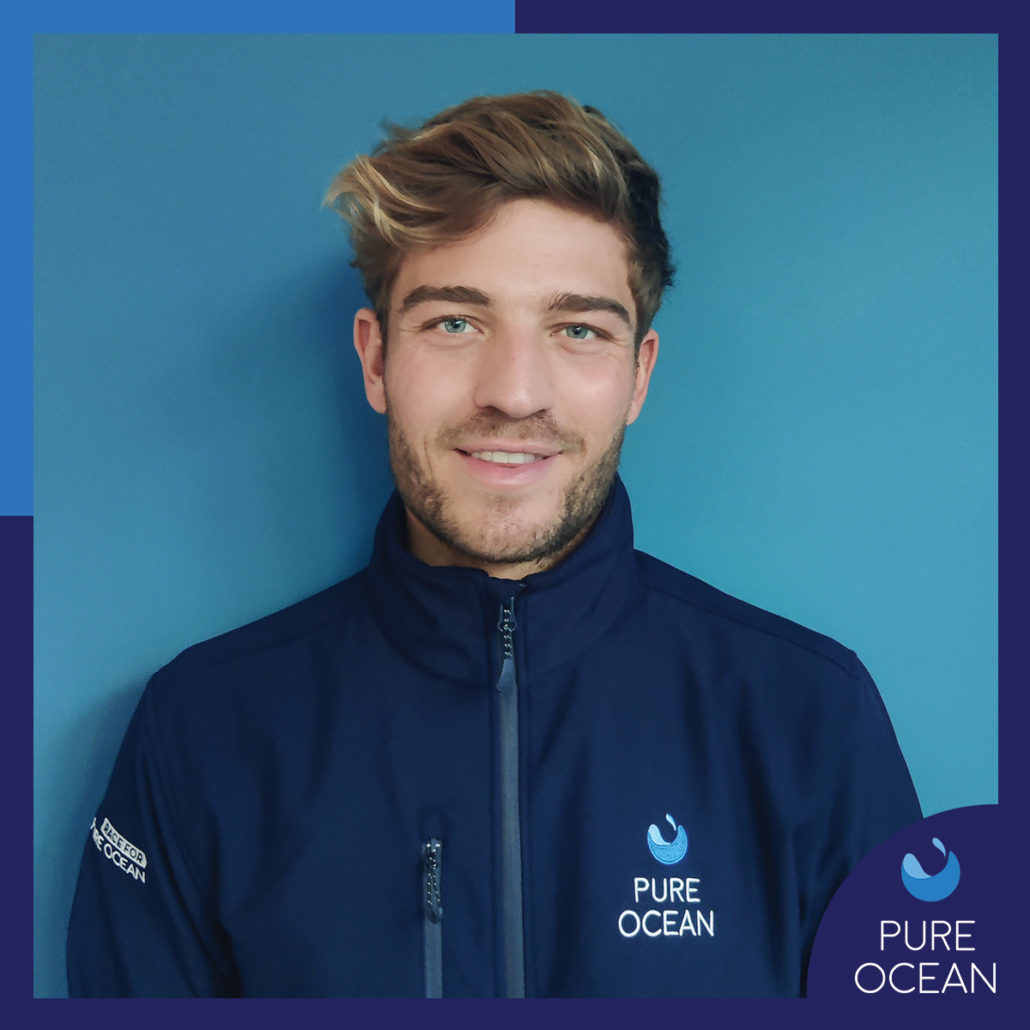 Fabio Gennari, an amateur with a passion for sailing from a young age, learned to sail at home in Marseille.
In 2018, in parallel to his work as an administrative judge, he trained for a year on the Class 40 circuit in La Trinité-sur-Mer before returning to train in Marseille with the goal of participating in the next Route du Rhum – Destination Guadeloupe in 2022. For this single-handed race on the Atlantic, he has chosen to wear the Pure Ocean colors.
The boat will carry the name “Bella Donna – Race for Pure Ocean” in the Route du Rhum, it will display the colors of the association on the hull and its main sail will be built from recycled plastic. Fabio will encourage his supporters to contribute to Pure Ocean’s action. 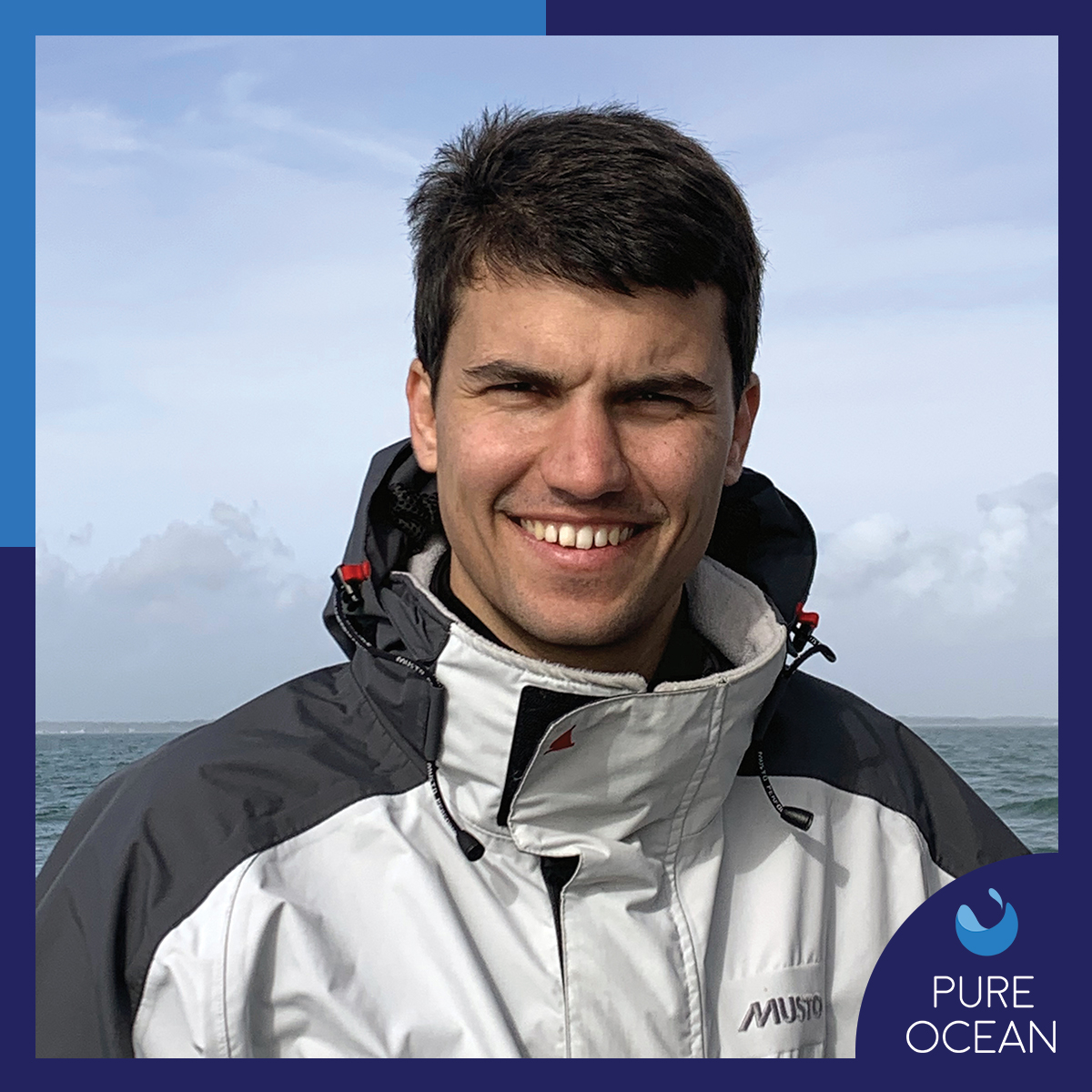 Jessie Kampman, who has been a sailing enthusiast since she was a little girl, discovered kitefoil while in college. She has traveled a lot and the practice of this sport has led her to become aware of the degradation of the ocean, her playground, especially because of plastic pollution.
Today, she has only one goal in mind: the 2024 Olympic Games! Jessie has decided to wear the Pure Ocean colors to invest in the actions of the NGO to raise awareness of the protection of marine environments. 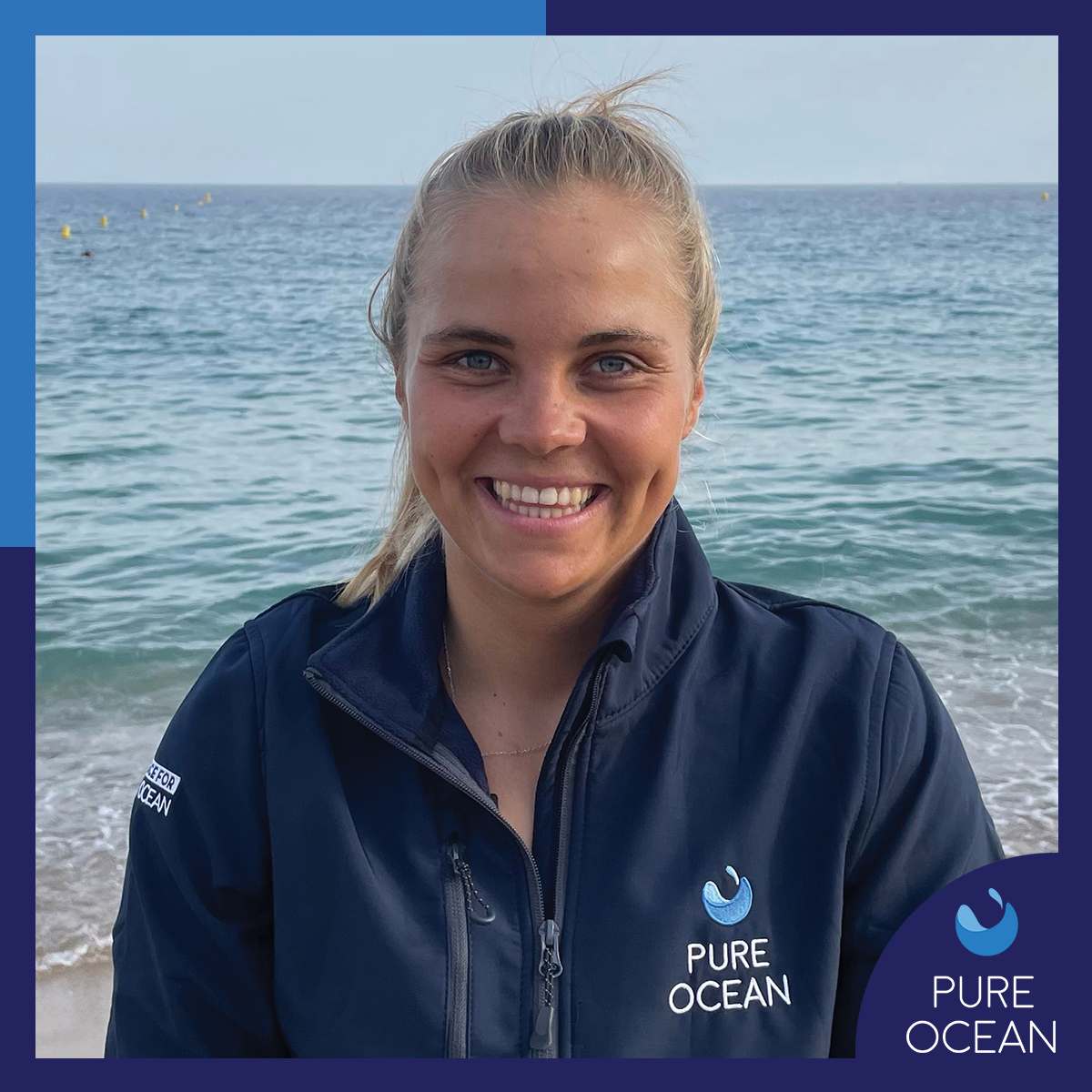 20 years old and already high level athletes, Manon Peyre and Clara-Sofia Stamminger train almost daily with one goal in mind: to be selected for the Paris 2024 Olympic Games.
Friends for more than 10 years, the duo decided in 2020 to set up an ambitious sports project with the dream of making France shine at the Paris 2024 Olympics.
Very quickly, the chemistry between the two sailors worked, with promising results in the U21 Junior World Championship in 2022, where they finished 3rd.
But that’s not all, our athletes are also students: Manon is at the University of Paris-Dauphine while Clara-Sofia is studying physiotherapy.
Their favorite playground? The sea or the ocean, of course. Today, Manon and Clara have decided to commit to this cause close to their hearts because it is necessary to act. They are convinced that all together, we can change things. 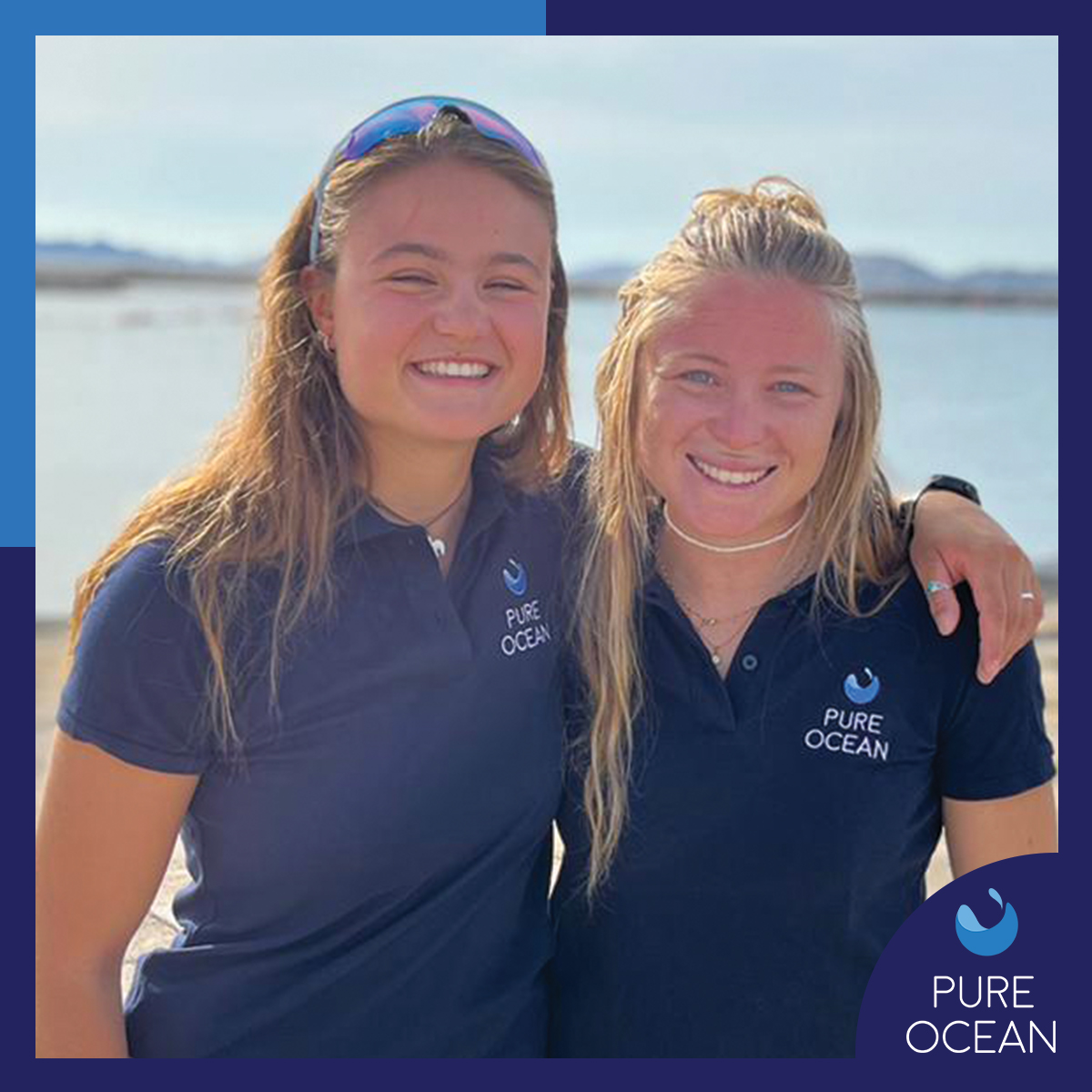